Methylation analysis is hampered by the simple fact that PCR amplification removes methylation marks from native DNA. We came up with a simple idea to produce a thermo-stable DNA methyltransferase to preserve methylation status through PCR cycles, allowing amplification of DNA and simplified analysis. The first thing we did was approach some enzyme companies to see if anyone had something suitable on their books, they did not. But they did seem to think this was a good idea so we designed a pretty simple experiment to test it: this involved going back to basics, to how PCR was performed before the application of Taq polymerase - we added Dnmt1 after each amplification cycle to copy methylation marks onto the daughter strands.

Demonstrating preservation of 5-mC: As a thermostable Dnmt1 is not commercially available we decided to introduce an additional step to ensure the methylation status is maintained during PCR amplification. We used commercial human DNA methyltransferase (Dnmt1) and the methyl donor S-adenosyl-L-methionine (SAM) after every PCR cycle to copy the methylation marks from the template strand to the newly formed complimentary strand. As the Dnmt1 will degrade at high-temperature and the SAM degrades at neutral pH and high temperatures, we need to add fresh reagents (Dnmt1 and SAM) at 37°C as the last step of each cycle.

NEB define 1 unit of Dnmt1 as the amount of enzyme required to catalyse the transfer of 1 pmol of methyl group to poly dI.dC substrate in a total reaction volume of 25 μl in 30 minutes at 37°C. The following amounts were added in the initial experiment:

Results: The final gels show the multiple reactions we set up to demonstrate the plausibility of preserving 5mC during a few cycles of PCR. 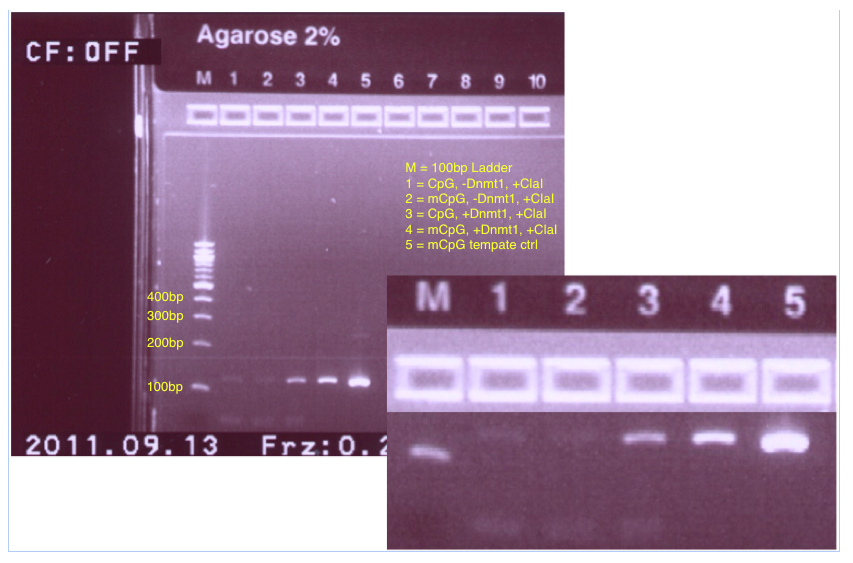 Conclusions: Dnmt-PCR works (lane 3 vs. 4)! It turns out that Dnmt1 may also have some de novo activity, not only the widely accepted maintenance one, so optimisation of the Dnmt1 incubation time/amounts is needed.

According to the literature, the maintenance vs de novo activity of Dnmt1 is in the order of 1-2 magnitudes, so hopefully we can manage to find optimum conditions. e.g. This paper shows that hDnmt1 has about 10% de novo activity, and that its Zn binding N-terminal domain is responsible for preventing the de novo methylation:

Unfortunately this is one of those projects that ran out of steam in our labs. Rather than leaving it to languish in a lab-book I thought I'd write it up here and who knows maybe someone else can push it forward.

Thanks very much to Martin Bachman the PhD student who did most of the work, and Santiago Uribe Lewis the post-doc who thought my idea was a useful enough one for his research on imprinting to take a risk on the project.