Two major problems are encountered by researchers wanting to analyse circulating tumour DNA; contamination by gDNA from white blood cells; and the relatively low amount of circulating DNA. Because of this the protocols used for blood collection and circulating DNA extraction are critical. This post describes some of the challenges in more detail and reviews some of the kits available.


Generally circulating DNA (cfDNA or ctDNA) is analysed from blood plasma. Whole blood is centrifuged within 1 hour of collection at at 1500× g for ten minutes to remove blood cells, the supernatant containing the plasma is removed taking care not to disturb the buffy coat. This is then centrifuged at a much higher force >10000× g for ten minutes to remove any remaining cells and stored at >−20°C for DNA extraction. In the ctDNA work published from the CRUK-CI a relatively small volume of plasma was extracted using Qiagen's QIAamp Circulating Nucleic Acid kit. However other kits are available and several papers have compared the performance of these, as well as the impact of blood collection and processing protocols.

We used EDTA blood collection tubes with the above protocol to remove as much contamination from white cells as possible. Increasing numbers of projects are using STREK tubes for stabilisation of blood for cell-free analysis of plasma DNA that contain a preservative that stabilises white blood cells. This prevents the release of genomic DNA, allowing isolation of high-quality cell-free DNA allowing storage for up to 14 days. They are more expensive than standard blood collection tubes but they avoid the need to have a research nurse perform a centrifugation protocol in a defined time after collecting blood. If sample collection is easy then accrual into a study is likely to be faster! 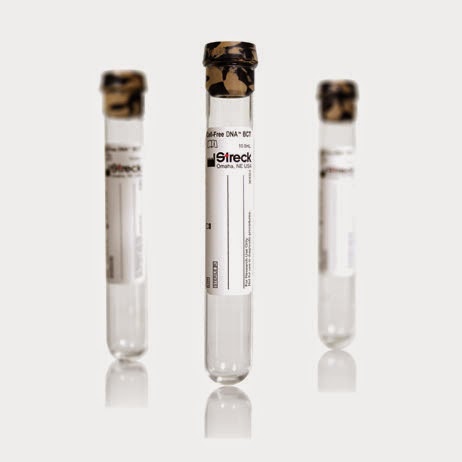 So what's in a STRECK tube? They don't say on their website but a look through some of their patents gives a clue: formaldehyde; specifically "[0015] The nucleic acid protective agent may include a formaldehyde releaser preservative agent [at a] concentration of...less than about 20 mg/ml of the blood sample.", or metabolic, protease and/or phosphatase inhibitors, or an anticoagulant agent and a fixative agent... etc, etc, etc (reading patents is an art)

Comparing different extraction methods: The papers discussed below all shed light on some of the main issues in collecting circulating DNA for analysis. The take home message has to be to use a very standardised protocol in your study, and that this should be one that is easy for you to implement.


A 2003 paper  [1] proposed the use of magnetic beads for cell free DNA extraction and compared these to Qiagen extraction. Both methods gave reproducibly similar results (I'll come back to this at the end of this post).

A 2009 paper from Singapore General Hospital [2] compared 7 extraction methods. They reported very different performance characteristics; and their own Sodium iodide method (protocol available on request), a phenol/choloform method and Qiagen QIAamp methods were the best performing.

Barret et al 2011 [3] assessed different collection tubes (K(3)EDTA and STREK tubes) and storage conditions on the yield of cfDNA from maternal blood. They used digital PCR of a short (cfDNA) and long (maternal gDNA) PCR assays to demonstrate that the proportion of cfDNA decreases over time due to the increase in maternal DNA due to cell lysis; but that this "can largely be prevented" by collection into STRECK tubes. They also showed that storage at 4°C is not necessary, but that immediate centrifugation after blood draw is; particularly when samples cannot be immediately processed.

Page et al 2013 [4] produced a very comprehensive comparison of 4 cfDNA kits, controlled with a reference spike-in sample (Lambda Hind III), using TaqMan qPCR and targeted deep sequencing. They also showed how increasing the time between venepuncture and centrifugation, and the centrifugation force used for plasma did not affect recovery of cfDNA. They were able to detect ERBB2 amplifications using the Ion Torrent cancer panel. They concluded that the Qiagen kits performed best. Figure 1 from their paper shows the performance of different kits. Both Qiagen kits gave high recovery of both cfDNA and Lambda spike DNA, however although the NucleoSpin and Epigentek kits appeared to perform badly with cfDNA, the performance was not similarly bad for the spike-in. 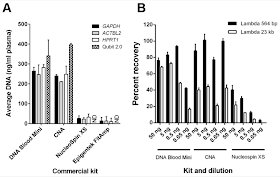 Dont extract: Breitbach et al 2014 [5] evaluated the direct amplification of cfDNA and found that concentrations were measured to be almost 3 fold higher than the eluate of the QIAamp DNA Blood Mini Kit. They saw that almost 40% of cfDNA was lost in the buffers used during extraction and estimated that up to 10% of cfDNA was permanently bound to the column.

Bead-based cell-free DNA extraction: Removing the centrifugation step would make protocols much easier to use, but is likely to require very defined collection, storage and processing protocols to minimise gDNA contamination from white blood cells.

LGC published a paper [6] describing a method they commercialised to extract gDNA from dried blood spots. This starts with a cell lysis step so is not suitable for circulating DNA, however the binding to magnetic-beads is such an easy process to run in the lab I wonder if we might use it for a direct bead-based extraction from whole blood (or urine), without centrifugation?

In the Broad's 'Boot Camp' slides (a great introduction to NGS from circa 2010) they present the figure below of a double-SPRI for size-selection. My idea is to modify this principle to capture all the DNA in a blood tube immediately on the lid being closed with a reagent that would make a high-concentration (2.5x) SPRI cocktail. This would drive all DNA onto the beads including all cell-free and high molecular-weight DNA from white blood cells. The tube would then be placed on a magnet capturing all DNA in solution and allowing everything else, cells, plasma, etc to be poured off. After a quick wash the cell-free DNA would be preferentially eluted with a low-concentration (0.5x) SPRI mix, leaving high molecular-weight DNA bound to the beads. The reformulation as part of a blood collection tube, similar to DNA Genoteks saliva collection tubes, could make this a very easy sample to collect and process. And the removal of any centrifugation steps and ability to collect cell-free DNA from the whole sample would hopefully increase sensitivity by maximising cell-free DNA recovery.