Cufflinks for Christmas anyone?

Update: the cufflinks referred to on GenomeWeb have now sold and made £60 for charity. If you would like me to put another pair on eBay leave a comment below and I'll add a link.

I posted last year a picture of some Ion Torrent 318 chip cufflinks. The PGM chips make nice cufflinks even if they are a little on the large side.

I wore them to an Illumina seminar and Nick Loman "outed" me on Twitter!

A set is now for sale on eBay after someone asked. The auction is only for three days so get bidding and tel your friends. I am happy to post these anywhere in the world but you'll have to cover any extra postage. 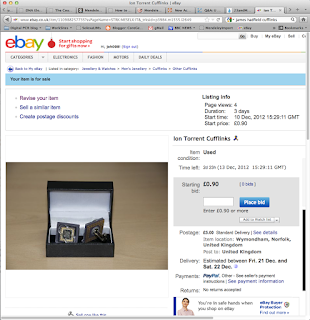 Any bids from Jjflatley to artificially increase the final purchase price are actively encouraged.
Posted by James@cancer at 15:47 16 comments:

The Prime Minister in Genomics

Today the Primer Minister of the UK, David Cameron, visited the Cancer Research UK Cambridge Research Institute and my lab!


We had only a little warning he was coming and had to quickly book instruments so we could turn them off. Most genomics equipment makes too much noise for the TV cameras. There were several people in the party which was split into two groups: David Cameron was accompanied by; David Willetts MP, Minister of State for Universities and Science, the Government's Chief Medical Officer, Professor Dame Sally Davies and the life Sciences ‘Tsar, George Freeman MP (my MP back at home). The visit was hosted by: Professor Sir Bruce Ponder, Director of CRI, Dr Harpal Kumar, CEO, CRUK and Sir Leszek Borysiewicz, Vice Chancellor of Cambridge University. Also in attendance was my boss.

It was a little nerve wracking having my boss, his boss and his bosses boss standing by while I was talking to the countries boss. To many chiefs in the Genomics core.

Why were they here: The UK Government announced a new initiative to invest in medical genome sciences today. Up to 100,000 UK patients will have their DNA sequenced (partially or fully ) as part of a drive to revolutionise NHS treatment with £100m being earmarked for training genetic scientists, mapping patients' DNA, and creating systems for handling the information. The hope is that this investment will help to drive costs down to the point that sequencing can be a normal NHS test.

Science minister David Willetts said “Life sciences is one of the most truly international sectors - so if we are to continue to be a world player and compete in the global race we must do everything we can to support it.”

In the press release they make on small faux pas stating that patient genome data will be anonymised before it is stored. You can’t anonymise someones genome without removing a the interesting content. I think we’ll all end up being much more comfortable with relatively open access to our data. If the EU carry on with their equality agenda then qwe’ll all end up paying the same for health insurance anyway.

The Primer Minster David Cameron said “this new plan will mean we are the first country in the world to use DNA codes in the mainstream of the health service. If we get this right, we could transform how we diagnose and treat our most complex diseases not only here but across the world, while enabling our best scientists to discover the next wonder drug or breakthrough technology.”


He is absolutely right about this kind of investment helping to lead to the next breakthrough. I tired to press home the point that the technology he was seeing in my lab came from research just down the road in Shankar Balasubramanian’s lab in the University of Cambridge Department of Chemistry.

Sally Davies, the Government's Chief Medical Officer said "this funding opens up the possibility of being able to look at the three billion DNA pieces in each of us so we can get a greater understanding of the complex relationship between our genes and lifestyle."

CRUK has been working hard on personalising cancer medicine with the Stratified Medicines Initiative. About 9,000 people with breast, bowel, lung, prostate, ovary or melanoma cancer will have their genomes seqeunced for key cancer drivers.

It's not only three year olds that can sequence genomes, even political leaders can do it. And at least David Cameron was wearing a lab coat!


PS: Unfortunately it does not look like this is new money so the £100M may be coming from somewhere else in the NHS. It could turn out to be a bit like robbing Peter to pay Paul. However in the current economic climate finding new money anywhere is tough.
Posted by James@cancer at 12:46 2 comments:

A recent Lancet paper (Whole-genome sequencing for analysis of an outbreak of meticillin-resistant Staphylococcusaureus: a descriptive study) describes work in the Rosie’s special care bay unit at Addenbrookes hospital in Cambridge (just across the road from where I work).

The group studied a putative outbreak of MRSA in the SCBU and demonstrated that the carrier responsible for reintroduction was a member of staff. The paper is an excellent demonstration of how NGS is going to change our lives. I hear a lot about personalised cancer medicine and it is undoubtedly going to impact patient treatment, but public health is likely to get a boost as well. If we can screen communities in a similar manner than detecting diseases before symptomatic outbreak occurs could have a major impact on health. Combine this kind of testing with hand-held PCR and MinION and there could be opportunities to take these tests to sub-Saharan Africa, the Indian sub-continent and other far-flung parts of the world.

Is this paper going to have a similar impact as John Snows manuscript on cholera from 1854? Probably not but I expect it is going to be highly cited and I’d certainly recommend you read it even if this is not your area of speciality. It received a lot of media coverage and the comment I heard most was “how do you decolonise someone of MRSA?”

The paper say the whole genome sequencing of MRSA cost £95 per isolate. I’m not sure, but the sequencing of a single isolate is likely to be a tiny fraction of a MiSeq run. Combined with a modified diluted Nextera library prep this could be done for perhaps as little as £5. The MRSA had to be cultured before sequencing could be performed, so perhaps the culturing is the expensive bit? Prof Robert Brooks at the American Academy of Orthopaedic Surgeons suggests that culturing cost $20 per sample and a PCR test is $200. Sequencing is in the middle today and could easily become cheaper than the culturing currently required. As costs continue to fall this also raises the possibility of longitudinal sequencing across multiple colonies in multiple patients which should tell us something about the dynamics of MRSA infection.

In the discussion the authors said that MRSA transmission was almost certainly missed because a weekly screening program is currently used. Some babies were MRSA negative on admission but the unit left within seven days and later developed MRSA. The speed of this kind of test means continuous testing could be just around the corner.

It looks likely that whole-genome sequencing of MRSA could be coming to a hospital near you soon. I don’t know if it is possible to detect MRSA in the blood but I’d love to try and see if it is possible. A Taiwanese group published a qPCR assay for MRSA testing in blood.

PS: If the authors would like to try and analyse blood I know a core facility with some experience of developing this kind of method!

I am often asked for a good NGS reference, or references that explain the technology used in next generation sequencing experiments. I have gathered together a list of my favourites over the past few years and thought readers of this blog might like to see what I'd recommend. I would be very interested to hear if you think I should include other references and if so why.