We had a seminar form 10X Genomics today to present some of the most recent updates on their systems and chemistry. The new chemistry for single-cell gene expression and the release of a specific single-cell controller show how much effort 10X have placed on single-cell analysis as a driver for the company. Phasing is looking very much the poor cousin right now, but still represents an important method to understand genome organisation, regulation and epigenetics. 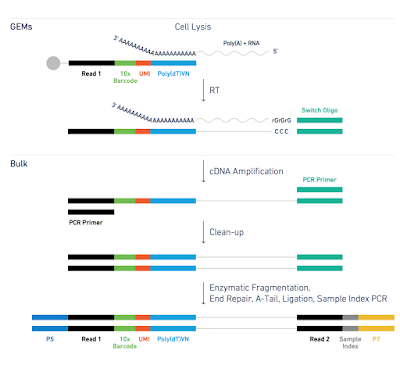 Single cell 3'mRNA-seq V2:  the most important update from my perspective was that 10X libraries can now be run on HiSeq 4000, rather than just 2500 and NextSeq. This means we can run these alongside our standard sequencing (albeit with a slightly weird run-type).

The new chemistry offers improved sensitivity to detect more genes per cell, improved sensitivity to detect more transcripts per cell, an updated Cell Ranger 1.2 analysis pipeline, and compatibility with all Illumina sequencers - sequencing is still paired-end but read 1 = 26bp for 10X barcode and UMI, Index 1 is the sample barcode, read 2 = the cDNA reading back to the polyA tail.

It is really important in all the single-cell systems to carefully prepare and count cells before starting. You MUST have a single-cell suspension and load 100-2000 cells per microlitre in a volume of 33.8ul. This means counting cells is going to be very important as the concentration loaded affects the number of cells ultimately sequenced, and also the doublet rate. Counting cells can be highly variable; 10X recommend using a haemocytometer or a Life Tech Countess. Adherent cells need to be trypsinsed and filtered using a Flowmi cell strainer or similar. Dead cells, and/or lysed cells, can confuse analysis by leaching RNA into the cell suspension - it may be possible to detect this by monitoring the level of background transcription across cell barcodes. The interpretation of QC plots provided by 10X is likely to be very important but there are not many examples of these plots out there yet so users need to talk to each other.

There is a reported doublet rate per 1000 cells of 0.8%, which keeps 10X at the low end of doublet rates on single-cell systems. However it is still not clear exactly what the impact is of this on the different types of experiment we're being asked to help with. I suspect we'll see more publications on the impact of doublet rate, and analysis tools to detect and fix theses problems.

The sequencing per cell is very much dependant on what your question is. 10X recommend 50,000 reads per cell, which should detect 1200 transcripts in BMCs, or 6000 in HEK293 cells. It is not completely clear how much additional depth will increase genes detected before you reach saturation, but it is not worth going much past 150,000 reads per cell.

1 million single-cells: 10X also presented a 3D tSNE plot of the recently released 1 million cell experiment. This was an analysis of E18 mouse cortex, hippocampus, and ventricular zone. The 1 million single-cells were processed as 136 libraries across 17 Chromium chips, and 4 HiSeq 4000 flowcells. This work was completed by one person in one week - it is amazing to think how quickly single-cell experiments have grown from 100s to 1000s of cells, and become so simple to do.

Additional sequencing underway to reach ~20,000 reads per cell. All raw and processed data will be released without restrictions.

The number of cells required to detect a population is still something that people are working on. The 1 million cell dataset is probably going to help the community by delivering a rich dataset that users can analyse and test new computational methods on.

The seminar was well attended showing how much interest there is in single-cell methods. Questions during and after the seminar included the costs of running single-cell experiments, the use of spike-ins (e.g. ERCC, SIRV, Sequins), working with nuclei, etc.

In answering the question about working with nuclei 10X said "we tried and it is quite difficult"...the main difficulty was the lysis of single-nuclei in the gel droplets. Whilst we might not be able to get it at single-cell resolution, this difficulty in lysing the nucleus rather than the cell might possibly be a way to measure and compare nuclear versus cytoplasmic transcripts.
Posted by James@cancer at 15:57 340 comments: