At the top of Mt Kilimanjaro

Nature ran a great news feature on the top 100 papers of all time. The graphic below appears in the article and the first thing I wondered is where do papers I've been an author on sit? I know this is pure vanity but lets be honest anyone looking at this is thinking the same thing!

Here's the front cover to this weeks Nature featuring an image by Kelly Krause (@kellybkrause), Nature's Creative Director. It is a wonderful picture which manages to blend both Man and Mouse with the DNA helix as the mouse's tail, a lovely detail. 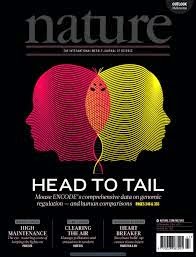 The Mouse ENCODE projects joins ENCODE and modENCODE, the scale of the data generation and analysis in these combined projects is staggering. Ewan Birney (lead analysis coordinator for ENCODE) described the efforts over five years of 400 scientists for the first ENCODE project on his blog. The fact that we can attempt big-data projects like this and succeed is a testament to the power of Genomics & Next-Generation Sequencing (the next best thing to sliced-bread).

Posted by James@cancer at 11:24 No comments:

Have I got New For You vists my lab...sort of

I'd like to say that Ian Hislop and Paul Merton visited last week to record a special HIGNFY, but alas no. However my lab did appear briefly on the most recent show, unfortunately the team mixed our institute up with King's College! Before I set the record straight I thought I'd include the snippet - it is not often you see people looking so bored when I'm talking to them...

Why the visit: Ed Miliband was at the Institute to meet the top brass of Cancer Research UK and to talk with cancer ambassadors. He spent a good thirty minutes listening to cancer survivors and asking them what would make a difference from their perspective. The Labour Party have recently pledged that NHS patients in England will wait no longer than one week for cancer tests. While here he also visited our light microscopy core and they got on Sky news!
Posted by James@cancer at 21:12 No comments:

Exome sequencing (@Exome_seq) can be used to generate CNV maps bit the data are noisy compared to WGS or SNP-arrays. In this post I’ll describe a novel workflow to get high-quality CNV from an exome-seq pipeline and show some very new data…

Image reproduced and enlarged at the bottom of this post.

A recent paper from the MD Anderson's Department of Hematopathology reports on their use of the AmpliSeq for a 409 gene panel on Ion Proton: Clinical massively parallel next-generation sequencing analysis of 409 cancer-related genes for mutations and copy number variations in solid tumours. I'm a big fan of amplicomes, another 'ome I know, and in this context used to mean all the amplicons in your panel. PCR is a great way to enrich for specific regions of the genome and we all understand the basics. For me amplicomes on NGS is perhaps the easiest NGS for the NHS. It simply replaces M13-PCR for a single amplicon with a multiplex PCR, and Sanger sequencing with NGS. If a doctor understood a Sanger test then this is perhaps an easier leap to make than trying to understand/explain what an exome is!

Back to the paper:  The MD Anderson group used their gene panel on FFPE material and reported on the "sensitivity, specificity, reproducibility, and applicability of using the Ion Proton 409-gene panel to routinely screen for SNVs, insertions/deletions, and CNVs". To do this they used 55 tumours (20 with paired normals) and four cell lines.

The Ion Torrent Ampliseq Comprehensive Cancer Panel uses 4000 primer pairs across four primer pools each requiring just 15ng on input DNA (60ng total), and up to 96 samples can be indexed using Ion Xpress Barcodes. Alignment and analysis of data was performed using the Torrent Suite software. And the groups OncoSeek was used to generate a clinical report.

Concordance between platforms was high when the group compared results to an earlier PGM panel of 46 genes, and detected pretty much everything they expected. The Proton did call some InDels that the PGM missed, which the group put down to improvements in calling software.

The group reported high sensitivity for SNVs up to 5% allelic fraction, and high reproducibility. This, coupled to the minimal FFPE input, and fast turnaround (5 days) makes the platform combination one that could be used in a clinical molecular diagnostics laboratory. Additionally they reported that up to 10 samples could be multiplexed per run and that this fitted in particularly well with their workflows.

Supercentenarian genomes: but are they the right ones

GenomeWeb covered a recent paper from Stuart Kim's group at Stanford University: Whole-Genome Sequencing of the World’s Oldest People. Unfortunately they did not find any longevity genes, and Kim was quoted saying "We were pretty disappointed."

There is lots of suggestion that longevity has a genetic component, but I can't help but consider that the environmental component is likely to be stronger, and this would mask the genetics. Kim's study was very small, just 17 genomes, so the chances of finding anything were equally small. But had there been low-hanging fruit this would almost certainly have been a Science paper rather than PLoS One (sorry PLoS).
Read more »
Posted by James@cancer at 12:06 1 comment:

HiSeq X Ten: when might they be available one at a time?

In the Summer I posted a Christmas letter to Santa. He's already delivered number 2 (cheaper RNA-seq) and 3 (longer RNA-seq reads via PE250), and number 4 might be coming soon (exomes at PE125). I'd also asked that he not deliver HiSeq X Ten as an individual instrument just yet, but as there are just 44 days left till Christmas I thought I'd look head and see what might be the reasons for, or not for gift wrapping a single X Ten this Christmas.

The 250bp paired-end HiSeq rapid run kits are almost here! Expect to get 150M reads per lane or more on the current rapid flowcells. What will you do with 150M 500bp OPES? 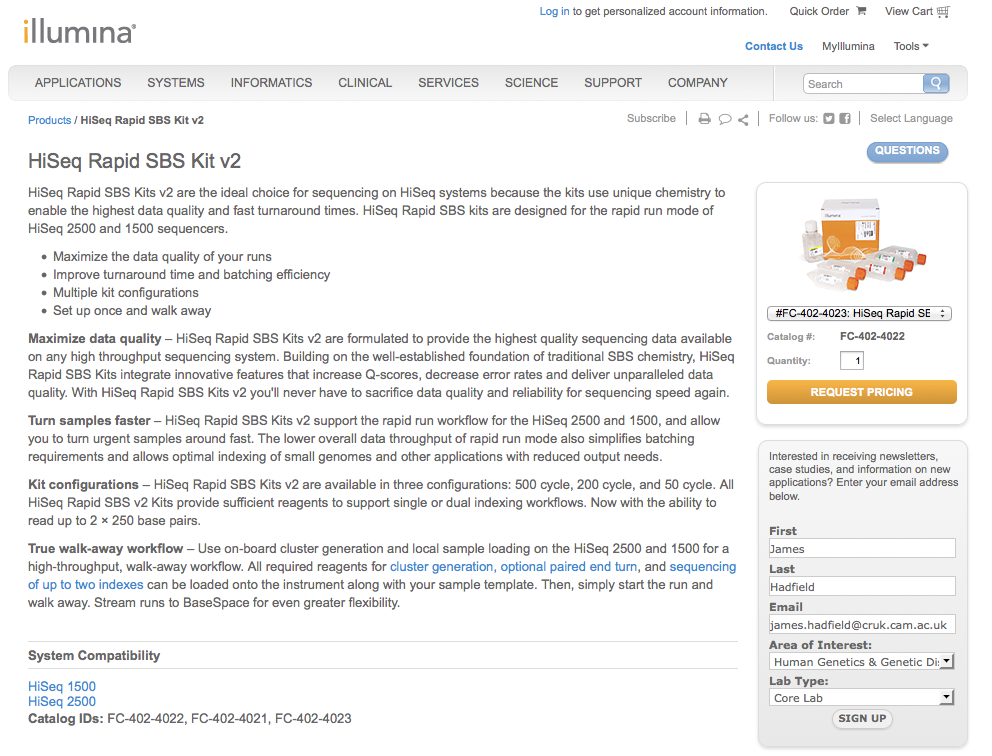 No word on pricing yet, and I could not find any PE250 data on BaseSpace. Looking forward to finding out more...