Illumina's is the most widely used next-generation sequencing technology, but like all technologies it is not perfect. You'll have to wait for their Nanopore sequencer for perfection! One challenge we have to deal with ever more with Illumina sequencing is the balance and number of libraries in a multiplex-pool. If either of these are wrong, then the final sequencing results can be useless or require significantly more sequencing than would normally be required.

In this post I am going to outline the advice I give to my users.

The low diversity problem: The technology does suffer from a low diversity problem that has been explained over at Pathogenomics. They describe this "fly in the ointment" for Illumina users sequencing amplicons and point to a SEQanswers thread suggesting some work arounds e.g. spike in lots of PhiX. The main problem derives from the need to find distinct clusters on the images, this is done by HiSeq Control Software (HCS) on the fly. The first step is template generation which defines the X,Y coordinates of each cluster on a tile and is the reference for everything else. Template generation currently uses the first four cycles (but can be configured to use more) and this data is analysed after the fourth cycle is complete which users will see as a pause by the instrument. Clusters are found in each of the 16 images (A, C, G & T for four cycles). A Golden Cycle (g) is determined as the one with the most clusters in A&C, this is used as the reference for everything else. By comparing merged A&Cg clusters with A&C and G&T in all cycles a two-colour map of clusters is formed that distinguishes broad clusters from closely neighbouring but distinct ones. However all though there are four bases Illumina instruments only have two lasers, red (A&C) and green (G&T, which I remember by thinking of the colour of a Gordon's gin bottle, green for G&T!) and in each cycle at least one of two nucleotides for each colour channel needs to be read to ensure proper image registration.

The causes of index read failures: If the index read is unbalanced due to poor mixing or low numbers of indexes then registration can fail due to the low diversity. The balance and number of libraries in a multiplex-pool impacts diversity and low diversity means too many clusters fail dempultiplexing and are thrown away. Illumina provide advice in their sample prep guides (e.g. TruSeq DNA PCR-Free Sample Preparation Guide (15036187 A)) on how best to quantify libraries before pooling and also on how to safely create low-plexity pools (more than 12 is usually safe). I'll now address both of these; Quantifying & Normalising and Deciding Index Plexity in a little more detail.

Quantifying & Normalising: Simply use qPCR quantification to get the very best estimate of nM concentration. Bioanalyser, QuBit and Nanodrop all work but can be very inaccurate when compared to qPCR, it all depends on your libraries. These other methods also quantify molecules that cannot form clusters, such as molecules without both adapters, oligos and nucleotide and can significantly over- or under-estimate pM concentration. A very good QC document is one I found from an Illumina Aisa/Pacific meeting.

Illumina recommends the use of Kapa's KK4824 Library Quantification Kit - Illumina/Universal kit, although now they are selling the Eco systems and their own NuPCR I'd expect an Illumina kit to come along any time soon.

KAPA's is a SYBR-based real-time PCR assay that uses two primers complementary to the ends of TruSeq, Nextera and other library types. During PCR only amplifiable molecules contribute to the CT reading and so the assay is more robust than spectropohotometry or fluorimetry. The method is not without its drawbacks but if care is taken with preparation of the samples and controls then very accurate results are possible.
For library normalisation after sample-prep we have more recently we have moved to a single dilution and only running the 1:10,000 as technical replicates because the results have been so robust. But for clustering we still make the three dilutions above and run the 1:10,000 dilutions as independent replicates. The reason for this is that normalisation can be off a little bit without impacting the experiment but only getting 80M reads when we are expecting 160-180M is embarrassing!
All this uses lots of tips and is a pain in the lab but it does give very good results, which are seen in the final barcode balance analysis.

Two words of warning. Firstly total fragment length is required not just the insert size, don't forget the adapters add another 120-130bp. Secondly, if you are using Illumina's TruSeq PCR-free kits then do not use the Bioanalyser to estimate library size as it significantly over-estimates fragment length due to "the presence of certain structural features which would normally be removed if a subsequent PCR-enrichment step were performed". The Illumina sample prep guide has a nice figure illustrating this comparing Bioanalyser and insert size distribution determined by alignment, and suggests using 470bp for 350bp libraries or 670bp for 550bp libraries in the calculations after Kapa qPCR. 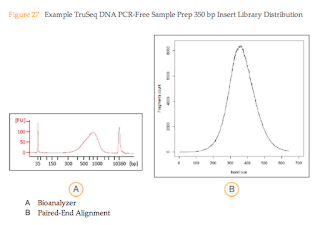 Improving qPCR: A big problem with qPCR as currently implemented is the need to know library size to calculate pM concentration. The assay uses an intercalating dye and is effectively measuring the amount of DNA present rather than the number of molecules. Fragment length is used to calculate number of molecules and if this is wrong then quantitation will also be inaccurate. Ideally we would not bother with the Bioanalyser but we need to understand insert size, this potentially doubles the work we need to do for QT of a library.
In my group we discussed a few years ago the use of a TaqMan assay in place of SYBR and other groups have subsequently published methods for this. A TaqMan probe assay counts the number of molecules hydrolysed in each cycle of the qPCR, as such CT gives a direct measurement of the number of molecules present. We're working on an assay to use in the lab as none are available commercially but if someone wants to make one for us please get in touch!
Deciding Index Plexity or "how many samples should I put in my sequencing pool": Illumina do provide advice in their sample prep guides on how to safely create low-plexity pools but the diagrams can be confusing when you see them for the first time. Usually 12 or more libraries in a pool are "safe" but the mix can go badly wrong. Adding larger numbers of samples to the pool makes this issue disappear, but if a user gets it wrong then a whole lane or flowcell of sequencing can be ruined.
Since we started multiplexed sequencing I have been trying to convince users that small pools are the wrong way to go. Most people simply decided to put as many libraries in a single lane as they could and still get the required number of reads at the end of the run, e.g. 4 ChIP-seq samples pooled in 1 SE36bp lane that will generate 160M reads or 40M per sample.
I always preferred the mixing of all experimental samples into a super-pool and sequencing as many lanes as required. Users were wary of this because quantification was not robust, but as most have swapped to Kapa qPCR this is no longer a problem. However we still have users giving us pools of three or four samples; which can result in low diversity problems in the index read causing too many perfectly good clusters to be thrown away when they do not demultiplex.
Fixing low diversity once and for all: Sequencing is cheap and fast and at least three "simple" fixes appear to be possible. Firstly we can simply use higher numbers of indexes to remove the problem entirely. Secondly we could use a longer cluster definition "read" which would lessen the issue. Thirdly would be to make sure the first four bases of the index read were from random nucleotides. These random bases could be added during adapter synthesis and add four or eight cycles of sequencing to a run.

An added benefit of large "super-pools" being sequenced across multiple lanes and/or flowcells is that failures in the sequencing of any kind can be tolerated as long as most of the data is generated. IF a tumour:normal pair are sequenced as single lanes and one lane fails then no analysis can be performed. If the same pair are indexed and mixed with 7 other pairs and one lane on a flowcell fails copy number analysis would be hardly affected at all. The same principle applies to pretty much any method.
Ultimately I'd like to see micro-molar scale synthesis of pairs of i5 and i7 indexes such that almost every sample in a lab is unique. The index pair would be used once an thrown away. For Genomes the cost would be truly negligible, even for RNA-seq with a £60 sample-prep an additional £3-5 on oligos could be tolerated if it removed sample-mixups. 80 pairs of oligos (32 i5 x 48 i7) allow 1536 samples to be run, more than most labs run in a year.
Posted by James@cancer at 20:44