Clive Brown and MinIon spotted at the cinema

So the drama is finally over and now we can expect great things from the company developing the worlds best nanopore sequencer, Illumina's Jat Flatley confirms they have one in development!

And at the same time MinIon is about to make it's comeback in the latest sequel from Universal... 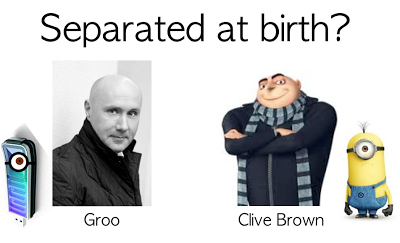 Seriously though, what does the fall out between Illumina and ONT mean for both companies?

ONT certainly made the largest splash ever at AGBT and perhaps the meeting could be said to have "jumped the shark" in 2012 because of it? Was the ONT presentation credible, a lot of people are saying no, but an even larger number (myself included) are holding onto the hope that now the litigation is over and once a few technical issues get cleared up we'll be buying MinIon's for Christmas.

A very public break-up: whilst it may not have made the front page of the National Enquirer, GenomeWeb and others did report on ONTs news that the agreement between them and Illumina had been terminated. This was followed up by some very public comments; first from Illumina's Jay Flatley who said "the technology [ONT's], ... is still a ways away from commercialisation" and again repeated his comments from this years JP Morgan conference that Illumina were developing their own Nanopore sequencer. ONT responded by saying "Illumina has no access to Oxford Nanopore's relevant technical or commercial information around the company's products" and that Jay Flatley must have been "referring to [Illumina's] own technology development efforts rather than that of Oxford Nanopore."

Where will it all end? I've spoken to lots of people about ONT; it is a standard topic for discussion at the bar when Genome technologists meet up, and one possibility is that it won't. Perhaps ONT can give us long reads, maybe 10kb or even 100kb but maybe we won't get millions in the initial instrument. The technology seems more scalable than PacBio so even if we only got 100,000 100,000kb reads we'd certainly be able to do some great experiments. Especially if we really can get hmC and 5hmC as part of the package. I'm happy to wait for my 15 minute GridIon genome.

One thing I was surprised about was Roche giving up the ghost on it's collaborations with DNA electronics. I'd been thinking for a while that semi-conductor sequencing might be about to take off with some real competition in the space. DNAe are still working hard on developing panels for NGS, and as this is a huge growth area I hope they'll soon have something we can test. Their real-time PCR on a semi-conductor chip could be the disposable test we've been looking for. More about that on a later post.