A recent PLoS One paper is perhaps the latest battle in the Illumina vs LifeTech war. The latest paper in PLOS ONE presents a comparison of MiSeq and Proton PI sequencing to detect chromosome abnormalities in self-aborted foetuses: Chen et al: Performance Comparison between Rapid Sequencing Platforms for Ultra-Low Coverage Sequencing Strategy .

The group were aiming to evaluate the use of ultra-low coverage sequencing (ULCS) to identify aneuploidy for potential use in the clinic. They compared data from 18 spontaneous abortions making libraries for both MiSeq and Proton with 50ng of input DNA and and the same 10 PCR cycles in both methods. Materials and methods descriptions of the library preps were refreshingly clear and both data sets have been deposited in the SRA: MiSeq - SRA116521 & Proton - SRA116521. The team used 150bp paired-end sequencing and generated 4.58 million reads in 27 hours on MiSeq (215k reads per sample); and 111bp single-end sequencing, generating 39.33 million reads in 4 hours on Proton (1.7M reads per sample) - almost 8x more data per sample by their calculation! In the analysis they sub-sampled 90k reads randomly from each sample.

Comparing MiSeq and Proton: The group said they saw no significant difference between the two platforms when it came to detecting anueploidy or across several QC's they investigated. The two figures below, reproduced from the paper show anueploidy as called by the two platforms (A) and relative sequence depth (RD) (B) across the chromosomes averaged for all 18 samples. There was a slight difference when it came to calling sex of the foetus, whilst both platforms showed 100% accuracy for the sex determination the MiSeq data was a little tighter, they put this down to the use of paired-end and slightly longer reads but did not test this hypothesis by reanalysing MiSeq as single-end and clipped to 111bp, which would have been pretty simple. There was also a significantly higher duplication rate in the Ion data, and although the extra reads meant this was not a problem in calling aneuploidy, the authors discussed several areas they'd like to see optimised, however I'm not sure the library prep that needs optimising or the emulsion PCR. Another comparison paper by Quail et al improved library-prep on Ion with the use of a different polymerase, however attempts to improve bias seen in ePCR was unsuccessful. Lastly the authors of the UCLS paper did not compare platform error rates, this could be justified as their analysis is alignment based and could easily tolerate lower quality data, but this is likely to be strikingly important for users who are calling SNPs. 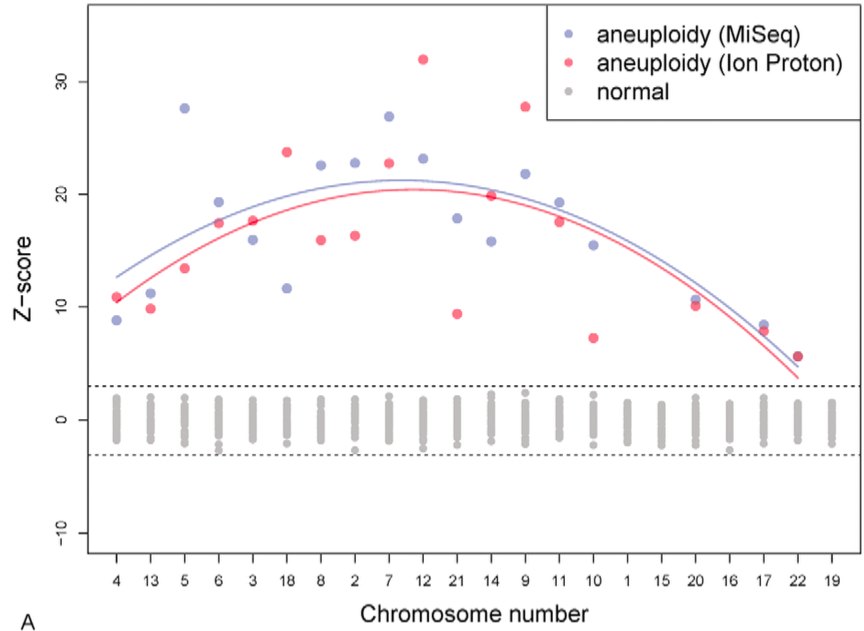 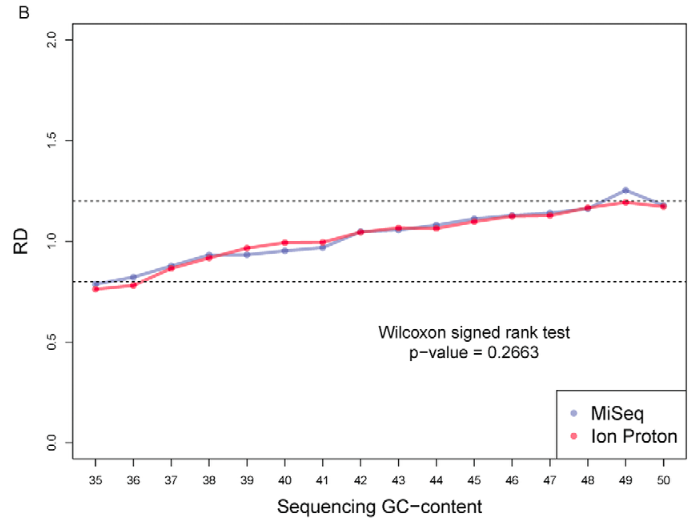 Basic stats from the run were presented in a table: however table 2 in the figure appears to double count the MiSeq's paired reads. 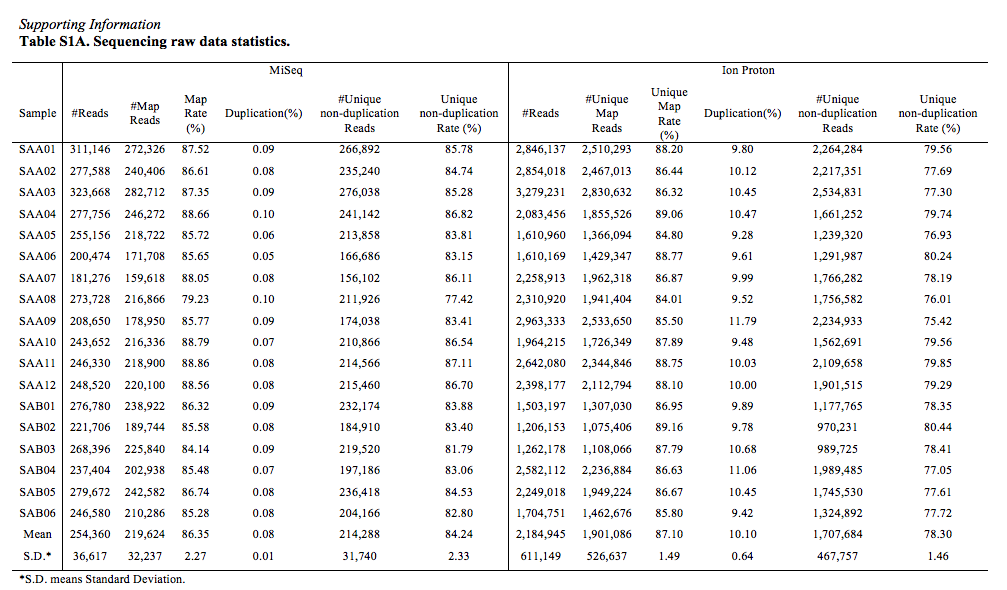 So what does this comparison tell us that's useful in Illumina vs LifeTech:

Round 1 - speed: The two sequencers both run fast: although the paper describes the use of long-read MiSeq data the system can complete a run in as little as 4-5 hours and this is total run time including clustering from a prepared-library. Proton is advertised as having fast run-times and it can complete a run in about 4 hours too, however template prep needs to be done off the instrument and adds time and complexity after library preparation (about 8 hours total run time).

In the paper the authors are somewhat swung by the apparent shorter TAT of Ion Proton, but I think they are mistaken once everything is taken into account. I've no experience of the Ion One-Touch or prep for Ion sequencing except for AmpliSeq, but from what I understand Illumina can certainly keep up with respect to time, especially on short reads. So I'd like to see future comparisons break-down more carefully the time element of different stages in the materials and methods sections. Both systems compete well on speed, round 1's a draw.

Round 2 - read numbers: The major difference in this comparison is the number of reads generated, especially once the PII chips come out (finally, probably in 2014). LifeTech are promising 200M+ reads per chip, Dale Yazuki has a great post comparing NextSeq to Proton PII if you want to hear more (disclosure: Dale works for LifeTech but is a very unbiased blogger). At these read depths Proton certainly looks like it can compete very well in a clinical market where turnaround time and cost per sample are so important. Going by Dale's numbers Proton will generate 200M reads for $1000 $500/100M reads whilst NextSeq will give 400M for $1300 $325/100M reads, making NextSeq not quite half as expensive per read. Looks like Illumina win round 2. Edited after reading Dale's update!

The dramatic decrease of TAT and cost make sequencing technology comparable or even superior to some existing approaches, such as comparative genomic hybridisation.

Other comparisons: In Quail et al: A tale of three next generation sequencing platforms: comparison of Ion torrent, pacific biosciences and illumina MiSeq sequencers, the authors neglected to include the numbers of reads as one of their comparison metrics. But they found that there were key differences  in data quality of the platforms. In Loman et al: Performance comparison of benchtop high-throughput sequencing platforms, the comparison showed that at that time MiSeq had the highest throughput per run and lowest error rates, whilst the Ion Torrent PGM had the highest throughput when run in 100bp mode but struggled with homopolymers.
Summary: Loman et al compared read numbers across platforms and I think this is a hugely important metric for many applications. Dale's blog focuses on the impact of transcriptome analysis as users running DGE don't need many reads. So rather than the battle for exomes, which LifeTech seem to be aiming for, I think the real war will be over low-read-per-sample methods such as RNA-seq, CNV-seq, ChIP-seq, ATAC-seq, DNAse-seq, smRNA-seq, Repli-seq, etc, etc, etc i.e. plenty of application space to fight over and at a low cost-per sample this means lots of sample-prep sales are possible too.
Will I be buying a Proton, almost certainly not for exomes and genomes, but for everything else - the jury's out. And I'll certainly be taking a closer look once PII chip lands and it delivers on the promise.
Posted by James@cancer at 10:00