Me and therest of the Genomics Core team (past and present) put quite a bit of effort into communicating with our users. This ranges from simple communications about when a project will be complete, or a sample might be run; to more complex communications like experimental design discussions. The group website had a major update two years ago and we started a group blog, we have an email HelpDesk, and have just added a new Twitter account specifically to inform users how long our Illumina sequencing queue is: @CRUKgenomecore puts out live Tweets directly from our Genologics Clarity LIMS.

Email HelpDesk: A major change for us was the introduction of an email HelpDesk where users create tickets and anyone from the group can respond - or pass the question onto the best person to answer it. This has allowed us to monitor and set response time targets for (64% of tickets are resolved the same day, and 80% within 2 days), we have a weekly rota on the HelpDesk so someone is always available, and I've seen a big reduction in the number of little questions being sent directly to me (apologies if I have not responded as quickly as you would have liked, but I get a molehill of stuff each day).

Thanks to our IT team for getting this set-up for us. The system we use is Request Tracker from BestPractical.  We use the help desk ticketing but it does much more than this. Best of all its free!
Twitter communications: I've tried to use multiple platforms to make it as easy as possible for us to engage with Genomics Core users. Using social media platforms like Twitter gives us another method of communication so we do not rely solely on word-of-mouth, email, or our website. Twitter may not be to everyone's taste, but it is easily accessible and the 140 character limit keeps messages succinct. How we can communicate has changed drastically; the spam from an "All-Staff" email is almost gone!

My Tweeting about our sequencers quite started a while ago. Initially this was to let users (and Illumina) know the HiSeq 2000 was broken again, but the 2500 proved to be much more robust and the focus switched to informing users about the length of our sequencing queue - albeit manually and not as regularly as I hoped. My Tweets generally peak when I'm at a conference, which could be a pain if all you cared about was when your ChIP-seq samples were going to be finished.

So now the Genomics Core now has two Twitter accounts, you can still follow me @CIgenomics (James Hadfield, Head of Genomics) and hear about things I think are interesting, but which you might not necessarily care about. But you can also now follow the lab and our sequencing queue @CRUKgenomecore which puts out live Tweets directly from the sequencing LIMS.

How does the LIMS Tweet: Some clever work by Rich in Bioinformatics has allowed us to pull out data directly from Genologics Clarity LIMs queue using a script run every 24 hours, and the Twitter API then allows that script to post messages on our behalf. Because of this the Tweets about our queue should happen every day and without manual intervention. Hopefully you'll be able to rely on these to give you a reasonable idea of how long you might have to wait for your sequencing results. Of course we can't predict what will happen with your particular sample so please treat the Tweet as a guide.

Tweets explained: The Tweets have a format that I hope is pretty intuitive, but I've described what all the bits of information mean below... 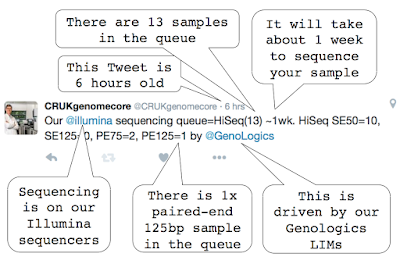 Thanks especially to Rich Bowers in the Bioinformatics core for pulling all of this together from a vaguely described idea by me, and thanks to Genologics for their encouragement (especially @HSJD19) and helpful discussions.

Hopefully users will agree that the short-form Tweet allows us to communicate real-time information that is useful to them, that can be relied upon, and is available "on demand". We'll stick with live Tweets from the LIMs for now, but may also Tweet seminar invites, publication successes, and other stuff we think useful - let us know if there is anything you'd like us to Tweet about. If you are a user send us a direct message to let us know what you think about @CRUKgenomecore.
Posted by James@cancer at 10:56