Don’t bother with a biopsy; just ask for a drop of blood instead.

I’d like to highlight some research that I have been involved in, which has just been published in Science Translational Medicine; Noninvasive identification and monitoring of cancer mutations by targeted deep sequencing of plasma DNA. The work makes extensive use of Fluidigm’s Access Array and Illumina sequencing, technologies that we have been running in my lab for over two and almost five years respectively. I’m proud of this work and I hope you like it as well.

Liquid biopsies for personalised cancer medicine: Tumours leak DNA into blood and the SciTM paper shows how this circulating tumour DNA (ctDNA) can be used in cancer management as a “liquid biopsy”. The study by Forshew et al demonstrates the feasibility of testing and detecting mutations present at about 2% MAF (Mutant Allele Frequency), in multiple loci, directly from blood plasma in 88 patient samples. The method has been christened Tagged Amplicon sequencing or TAm-seq.

We know that specific mutations can impact treatment, e.g. ErbB2 amplification & Herceptin, and BRAF V600E & Vefurabenib, etc. Many cancers are heterogeneous with metastatic clones differing from each other and/or the primary, and biopsying all tumour locations is unrealistic for most patients. Understanding this heterogeneity in each patient will ultimately help guide personalised cancer medicine.

ctDNA however has not been easy to assay. It is usually fragmented to about 150bp and is present in only a few thousand copies per ml of blood. There has been a recent explosion in neonatal test development since the publications from the Lo and Quake groups. Whilst people were aware of ctDNA for many years it is only similar technological advances that allow us to assay it in such a comprehensive manner.

How does the liquid biopsy work: ctDNA is first extracted from between 0.8 and 2.2ml of blood using the QIAamp Circulating Nucleic Acid kit (Qiagen). Tailed locus-specific primers are used for PCR amplification and the loci targeted in the paper account for 38% of all point-mutations in COSMIC. 88 patient plasma, a couple of controls and 47 FFPE samples were tested in duplicate clearly demonstrating the utility and robustness of their method.

Each sample is pre-amplified in a multiplex PCR reaction to enrich for all targeted loci. This “pre-amp” is used as the template on a Fluidigm Access Array where each locus is individually amplified in 33nl PCR reactions that are recovered from the chip to produce a locus-amplified pool from each sample. A universal PCR adds barcodes and flowcell adapter sequences. 48 samples were pooled for each Illumina GAIIx sequencing run achieving 3200 fold coverage. We recently ran a library with 1536 samples in it from a collaborator using the technology in my lab. The potential of 12288 samples analysed in a single HiSeq run is astonishing.

How sensitive is the liquid biopsy: The paper presents results from a series of experiments to test the sensitivity, false discovery rate (using mixed samples) and validity (using digital Sanger-seq) of the TAm-seq method. ctDNA can be successfully amplified from as little as 0.8ml of plasma, far easier to get than a tissue biopsy! They were able to detect mutations at around 2% MAF with sensitivity and specificity >97%. The paper has some very good figures and I’d encourage you to read it and take a look at those.

Two of the figures stand out for me. The first shows results from one ovarian cancer patient’s follow-up blood samples in which they identified an EGFR mutation not present in the initial biopsy of the ovaries. When they reanalysed the samples collected during initial surgery they could find the EGFR mutation in omental biopsies. A TP53 mutation was found in all samples except white blood cells (normal) and acts as a control (Figure A from the paper). 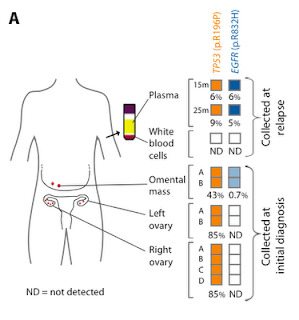 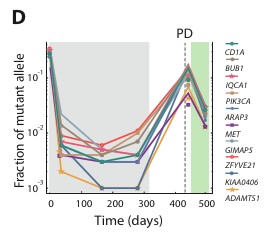 They presented an analysis of tumour dynamics by tracking 10 mutations discovered from whole tumour genome sequencing, using TAm-seq in the plasma of a single breast cancer patient over a 16 month period of treatment and relapse (Figure D). They also demonstrated of the utility of TAm-seq by comparison to the current ovarian cancer biomarker, CA125 (figures B & C not reproduced here).

What does this mean for clinical cancer genomes: There are many reports of whole genome sequencing leading to clinically interesting findings and some labs have started formal exome and even whole genome sequencing on patients. Whilst there is little doubt that tumour sequencing is likely to be useful in most solid tumours it is still hard to see how this will trickle down to the 100,000 or so new cancer patients we see in the UK. Challenges include cost, bioinformatics, incidental findings and ethics.

The TAm-seq method has fewer of these challenges (although it is not good for detecting amplifications) and I think it is a really big step in clinical cancer genomics and hope it translates quickly into the clinic to inform treatment and prognosis. Perhaps it will be the first technique to make a big splash in personalised cancer genomics?

Hopefully this liquid biopsy will be quickly translated into the clinic.

Perhaps a future version might even turn up in your doctor’s surgery on a MinION in a few years time as a basic screening tool?
Posted by James@cancer at 23:44