Illumina's Nextera capture: is this the killer app?

Illumina have released new Nextera Exome and Nextera Custom enrichment kits. These combine the rapid and simple sample prep of Nextera to in-solution genome capture and provide a straight-forward two-and-a-half day protocol. Add one day of sequencing on 2500 and you can expect your results in under one week.

I think many people did not expect exome costs to drop so fast. Ilumina's reduction of 80% was welcomed by many groups who wanted to run high numbers of exomes but could not when faced with the high costs and complex workflow without pre-capture pooling that other products had. Processing exomes is getting much easier on all fronts. Nimblegen compare their EZ-cap3 to Agilent in the EZ-cap v3 flyer, they did not include Illumina in thecomparison but they did use Illumina sequencing. It looks like Illumina can't lose whatever exome kit you buy!

A sequenced Nextera exome will cost £250 or $400 with 48 sample kits costing about £4000 and a PE75bp lane about £1000. That's cheaper than some companies are selling their exome or amplicon oligos for!

Nextera capture, how does it work: My lab beta-tested the new kits for exome and custom capture. The workflow was as simple as we expected and the data were high-quality. Nextera sample prep still uses just 50ng DNA and takes about three hours. The exome is the same 62MB but now with 12-plex pre-enrichment sample pooling, and still has two overnight captures.

We are still completing processing on our HiSeq of the full data set, but the initial analysis showed similar on and off-target results when compared to TruSeq, there was a higher duplication rate than we would normally see.

Below are three slides I put together for a recent presentation where I discussed our experiences with Nextera capture. They show that Nextera prep is simple (slide1), that QC can be confusing (slide2) but that results are good and costs are low (slide3). As low as £0.01 per exon! 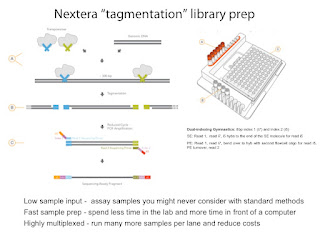 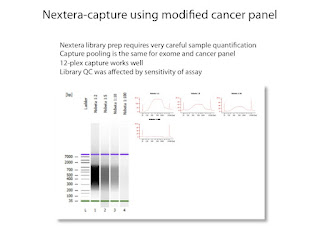 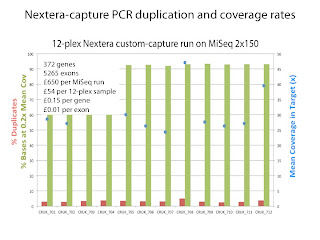 Does Nextera custom capture kill amplicon-sequencing: You can design custom capture kits using Illumina's DesignStudio (reviewed here). The process is pretty straight-forward and a pool of oligos is soon on its way to you.

Illumina's Nextera capture only requires 50ng of DNA while TruSeq custom amplicon needs 250ng, so Nextera lets you capture more with less DNA. Small Nextera captures run at very high multiplexing on HiSeq 2500 are likely to be far cheaper than low-plexity amplicon screens on MiSeq. If Nextera custom capture can move to 96-plex pre-capture pooling then the workflow gets even easier (see the bottom of this thread for some numbers supporting this idea).

It will be interesting to see how the community repsinds to Nextera capture. If it takes off then Agilent, Nimblegen, Multiplicom, Fluidigm and others are going to be squeezed. There was a recent paper (MSA-cap seq) from the Institute of Cancer Research describing a low-input 50ng prep for Agilent capture, others like Rubicon and Fluidigm are aiming for the low input space, even single cells.

I am sure we have a lot more to look forward to for the second half of 2012.
Although I still don't see a $1 sample prep!


PS: One comment I have sent back to the development team is that the protocol requires the same 500ng library input into capture for exome and custom capture. This means the ratio of target to probe is much higher for custom capture and might be reduced. This would allow users to run custom capture with much less PCR. Alternatively if users stick with a 500ng input to capture then they might be able to increase pooling to much higher levels.

Another thing I would like to see is the impact of completing only one round of capture. I'd assume we'd see a higher number of off-target reads. However saving a day when sequencing is so cheap for a small custom screening panel could be well worth it.
Posted by James@cancer at 12:10