What do celebrities think about science and what do scientists think of celebrity genomes?

Sense About Science is an organisation that tries to provide expert advice on scientific matters to whoever needs it. They monitor the papers and news and produces an annual “Celebrities and Science” round up of the best and worst comments from people in the public eye. The organisation behind Sense About Science has come under some criticism for being pro-GM and a bit radical and certainly not everyone is a fan. But I enjoyed reading through their annual reviews and wanted to share a few of my favourite comments. The best for me was from Nicole ‘Snooki’ Polizzi who said “the oceans were salty because of all the whale sperm”! See the bottom of this post for a selection from the last three years round-ups.

Sense About Science scan many publications looking for comment; of course celebs and politicians don’t always get it wrong but it is far easier to pick up on the crazies out there. There appear to be fewer celebrities who deny evolution or suggest “fossil fuels” aren’t running out, whilst some politicians careers appear to be built on such claims.


If you want to help out then you can sign up or email them with examples of bad science.

Jeff chaired the debate and before starting the room was evenly split between those who agreed, disagreed or were undecided on the statement “celebrity genomes are a useful contribution to science and society”.

During the debate Paul talked about the impact celebrities can have as patient advocates using Michael J Fox and Parkinsons as an example. Celebrities have as much chance of developing cancer as any of us and as they get their cancer genomes sequenced and see a benefit from the “treatment” they are uniquely placed to talk about the impact in a way that is going to get across to more people than coverage of a Nature paper on the BBC six o’clock news will ever do.

We should be trying to engage with this as much as possible, shouldn’t we?

PS: If you are a celebrity (why wouldn’t they be reading my blog?) and need some advice then help is just a phone call away, call sense about science on +44(0)20 7478 4380. I can’t promise they can say how many reads you’ll need for your next exome sequencing experiment!

PPS: If you want your celebrity genome sequenced there are plenty of labs in LA. 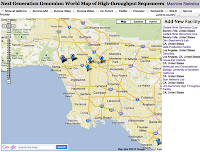 My pick of the best and worst from the annual round-ups.
Positive:

Bonnie Tyler when questioned about trying acupuncture said “I lost some weight but I was also on a more sensible diet at the same time which, if I’m cynical, is more likely the reason for the weight loss.” And Natascha McElhone’s comments about tetanus after a visit to Angola: “It’s completely preventable if you’re inoculated against it.”

Heather Mills “meat sits in your colon for 40 years and putrefies, and eventually gives you the illness you die of. And that is a fact.”

Roger Moore “eating foie gras can lead to Alzheimer’s, diabetes and rheumatoid arthritis. In short, eating foie gras is a tasty way of getting terminally ill.” I don’t eat foie gras on compassionate grounds but it is unlikely to be the cause of so many diseases, and I am not sure any of those Sir Patrick listed are actually terminal?

Alex Reid gave out a horrible message about unprotected sex saying “it’s actually very good for a man to have unprotected sex as long as he doesn’t ejaculate” and “semen has a lot of nutrition. A tablespoon of semen has your equivalent of steak eggs, lemons and oranges.” Irresponsible nutter if you ask me!

Julia Sawalha doesn’t get inoculated or take anti-malarials but uses “ homeopathic alternatives, called ‘nosodes’” and said “I’m the only one who never goes down with anything.”

Joanna Lumley, her AbFab co-star put the increase in cancer down to “the growth hormones in the food we eat, that try to make all the chickens, sheep and cows, more productive”.

Sarah Palin who’s autobiography “Going Rogue” says that she “didn’t believe in the theory that human beings — thinking, loving beings — originated from fish that sprouted legs and crawled out of the sea or from monkeys who eventually swung down from the trees.” Yikes how can such strong anti-evolution views be held by someone who (from a UK news coverage perspective) holds some power in the USA?

Michelle Bachman, member of the US House of Representatives and Republican Presidential Candidate, told journalists that a woman had told him her daughter suffered mental retardation after receiving the HPV vaccine, and that this vaccination program has dangerous consequences. What is the likelihood she is a right-wing, pro-christian, pro-guns, anti-abortion Republican?

These last two particularly disturb me. The first highlights how nuts some politicians are. The second because as the UK MMR scare showed, bad science can become mainstream fact and affect us all in a very negative way.

We shouldn’t believe everything we hear in the press, but politicians surely have an obligation to be careful about what they say.