Tycho Brae was recently exhumed for the second time. The astronomer died suddenly in 1601 and analysis of hair from a 1901 exhumation suggested he may have been poisoned. The recent exhumation by the University of Southern Denmark disproved this theory, however what exactly did cause his death still remains a mystery.

Why does Core Genomics care about this?

In 2009 I presented at an ABRF pre-meeting workshop on next-generation sequencing. This was the early days and I talked about Illumina while other speakers spoke about 454 and SOLiD. At the end of my talk I briefly mentioned the 1000 genomes project and put up this slide, suggesting that we might be able to sequence the genomes of famous scientists. 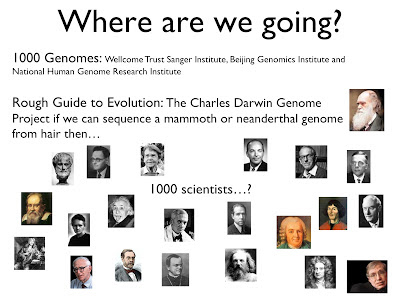 Recently Svante Pääbo's lab at the Max Planck Institute for Evolutionary Anthropology have developed a new library prep method that works on single-stranded DNA where ssDNA is dephosphorylated,  denatured, and ligated to a biotinylated adaptors; this is captured on streptavidin beads for strand-copying with DNA polymerase and a second adaptor is blunt-end ligated producing a sequencing ready library.

I don't know if they kept and samples for DNA analysis but if they did I'd be happy to sequence them.

Can we compile a list of celebrity scientists (deceased)? Feel free to add names by commenting on this post.