At the 2012 Illumina European scientific summit just outside Barcelona in June Sean Humphray presented work on HiSeq 2500 sequencing of clinical genomes. The results were pretty stunning with very nice data, generated and analysed in under a week, it really looked like we were going to be getting some nice Christmas presents from Illumina. Unfortunately Santa laeft it a bit late but the goodies are probably worth the wait.

Illumina announced three improvements to sample prep, new flowcells, PE250 on HiSeq 2500 (who needs a MiSeq). All of these are likely to make an impact on teh science we are all trying to do using these technologies. They should also keep Life Technologies on their toes and the competition between Illumina and Life Tech is likley to keep driving costs down and innovation along. We'll need that now that the FTC have given BGI:CGI the go-ahead for $117.6 million.

You can listen to Jay Flatley's JP Morgan webcast here.

Better, faster sample prep: all of us making sequencing libraries would like methods to be better, faster and cheaper. Well two out of three ain't bad.

Illumina announced new rapid exome capture kits based on Nextera that allow the entire process to be completed in 1.5 days, combine this your new HiSeq2500 rapid run and go from DAN to exome sequence data in just 2.5 days. This comment has been edited as the kit is even faster than the previous version I'd used, I thought it was fast enough but apparently the wizards at Illumina have worked even more magic!.

New TruSeq DNA PCR-free kits should be available to order at the end of the month. Sean Humphray's presentation gave us the details of the prep. 500ng input for PCR free  leading to very diverse libraries. This is likely to have a big impact on genome sequence quality and reduce GC biases due to PCR dropout.

Nextera Mate-Pair is an exciting innovation as traditional mate-pair methods have not been easy for everyone to adopt. I first heard rumours about this over a year ago. The ability to make mate-pair libraries from just 1ug of DNA is likely to be tried by many. The protocol makes use of a Nextera reaction to create large fragments for circularisation, these are used as an input to a TruSeq library prep to produce the smaller fragments ready for sequencing.  I'm going to post a follow-up on this so won't go into too much detail now.

I do wish Illumina would unify some of their Nextera kits, which today use different clean-up methods and have a few other idiosyncrasies between kits which should be pretty much the same. 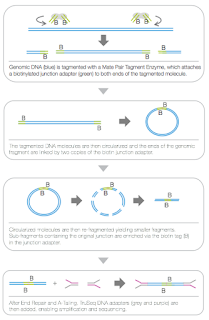 New targeted RNA-seq should allow users to analyse a few hundred or thousand genes in many samples at low cost. The cost of targeted RNA-seq will need to be low as differential gene expression can be completed with just a few million reads which today might cost just $50. Cheap sequencing requires cheap samples prep.

A less well announced change is the use of on-bead reactions in TruSeq kits. This is likely to make many applications easier to run, require lower inputs and create higher yielding libraries. I hope this and bead-normalisation will be in almost all kits by the end of 2013.

Better flowcells and who are Moleculo? New flowcells are promised that will give us a significant increase in cluster density, roll on the Summer! The figure of 300Gb from HiSeq 2500 announced by Illumina means we could get 3Tb of data in the same time a PE100 currently takes on HiSeq 2000. That is a lot of data, and all of it on BaseSpace in real-time.

Illumina also purchased Moleculo Inc, a Moleculo start-up company from Stephen Quake's group at Stanford University with very little information out there (see Moleculo Inc coverage by NextGenSeek). They have developed methods to allow generation of synthetic reads of up to 10kb which will be useful for many applications. How this might be combined with the Nextera mate-pair for high-quality de novo genome assembly remains to be seen.

BaseSpace underwhelms again: lastly Ilumina made another big splash about BaseSpace. I am a fan; but of what it could be and not what it is. I hope it does develop into a rich community that does not get too restricted by Illumina. There are just eight apps today and the community has yet to develop a "killer app". I've lots of app ideas but building them is not my area of expertise. If anyone wants to collaborate on building or designing apps give me a shout.
Posted by James@cancer at 21:59