The joy of grant funding for NGS

At regular intervals throughput the year I am asked for some help with costing next-gen sequencing experiments in grant proposals. The request usually comes towards the middle of the week leaving only a day or two before the deadline but that's just how we work in academia!

One thing that has struck me over the last five or six years is how much more sequencing a grantee can do when the samples are ready compared to when the grant was written as there is usually a delay of months (even years). If you take a look at the graphs below showing how costs have dropped between Jan '10 to Sept '12 you hopefully get the idea.

Making research $$$ go further: A grant awarded in 2010 for $500,000 might be spent over 3-5 years. If the bulk of the grant is for sequencing genomes, and the grantee spends some time collecting samples the affect on the number of genomes the grantee can sequence can be huge. The graph below shows that 11 genomes could be sequenced for $500,000 in January 2010, wait six months and this rose to 16 genomes. Wait a year and you could have sequenced 24, two years 65 and if you could hold out for three years you could sequence almost 10x as many genomes for the same $500,000. 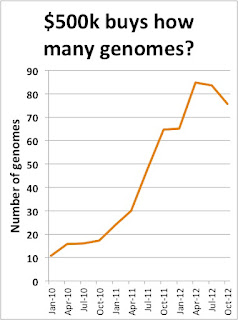 Will the NIH, Wellcome and others wake up to this: I've not looked at this before and it is rare to go through such a precipitous drop in the cost of a method. However most pundits are predicting the price to continue to drop and Illumina already announced big increases to capacity. Maybe we should be awarding the sequencing portion of a grant at 50% of what was asked for?
Posted by James@cancer at 08:39