Illumina's just announced a partnership with major automation vendors so their s-bot looks like it has been killed as a project. We've got a Tecan Evo in our lab and would like to use it for library prep but a major headache has been the rapid development of library prep methods. There just does not seem time to program and validate a method before the next one comes out. 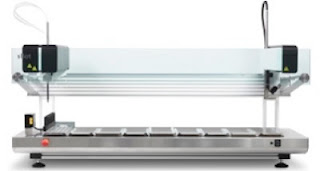 Having the likes of Beckman Coulter, Eppendorf, Hamilton, PerkinElmer, and Tecan working on protocols for their own kit should allow many more of us access to high-throughput library prep.

I'll be waiting for our Tecan rep to get in touch.

I'll also be insterested to find out who's picking up the tab when the libraries are rubbish!
Posted by James@cancer at 13:42