Patterned flowcells: what can we expect?

There was a real buzz in the community when Illumina resurrected the idea of using patterned flowcells for SBS sequencing (Keith Robison covered lots of genomics news back in January, including patterned flowcells ). One of the big problems with clustering is the need to very carefully quantiy samples before loading onto a flowcell. Most labs use qPCR or BioAnalyser but even the best rarely achieve perfect density on every run if they are working with a diverse group of libraries. Jay Flately at a JP Morgan conference said that only 36% of clusters are useable and that the new technology should double that.

Patterned flowcells have been mentioned before in Illumina roadmaps, they'll potentially allow 1Tb or more from a standard HiSeq run and are one way we might see an end to cluster density variability. But a patterned flowcell might also allow improvement of some methods and even interesting new applications to be developed.

We'll have to wait until Illumina release the new flowcells at the end of the year (more likely in January just before AGBT) but for now I thought I'd put down some thoughts I've been having about what we might get and look through one of Illumina's more recent patents.

Patterned flow-cells useful for nucleic acid analysis: Illumina hold a lot of patents (1800 results on GooglePatents and about 30 a year according to FreshPatents), this one was filed by Illumina in June 2012. It describes the patterning of flowcell surfaces using a variety of etched metal surfaces applied to glass and coated with gel matrix that is polyermised (or not) by light shined through from the bottom of the glass.

FIG. 3 in the patent (below) shows a flowcell with 3 micron, aluminum oxide spots coated with silane-free acrylamide (SFA) to wihch primers are attached. Flouresent probes were hybridised and the resulting images show the fluorescent signals from those primer populations i.e. the clusters primer lawn. Another Illumina patent uses polishing of the metal substrate to remove oligos bound to it creating the prdered array; and a third uses beads seeded with a DNA template molecule to start clustering, the cluster spacing being defined by the size of the beads. 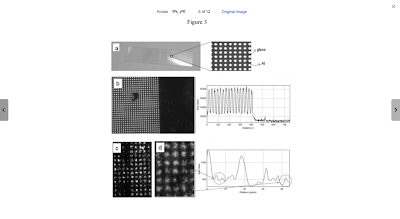 Cluster size: By varying the size of patterned region on the sirface of the flowcell Illumina are able to control the size of clusters made. This should allow a uniform cluster size making image analysis much easier, even for samples with varying insert sizes e.g. Nextera. The patent suggest Illumina might offer clusters of between 1nm and 1mm but 5nm to 500nm seems more likely.

Cluster density: By varying the mask spacing Illumina are able to produce flowcells with predefined number and placement of clusters. I can see this being a useful adaptation for users that need many fewer reads than a standard HiSeq or MiSeq might generate, I guess we'll see more nano and mocr-flowcells in the future? The patent suggests spacing of 0.5-100uM.

So what can you do with widely spaced clusters? An idea I hope may be possible is mate-pair without the prep. We can make libraries with very large insert sizes using the standard approaches but clustering and sequencing these is almost impossible over about 800-1000bp. With a defined cluster size the DNA could be constrained and produce a bright enough cluster for sequencing, as well as preventing overlap; simply spacing clusters at greater than library length should stop any over-clustering. This might also stop clustering being driven by the smallest molecules in a library.

Illumina have lots of other patents; here's another I though particularly interesting: Apparatus for fragmenting nucleic acids.
Posted by James@cancer at 11:56