JF did not disappoint at JPM: Jay Flatley announced both the HiSeq X Ten and NextSeq 500, two more instruments to add to HiSeq and MiSeq. HiSeq X Ten comes as ten “ultra-high throughput” sequencing instruments that together can generate 18Tb in three days, with 6B clusters per run! NextSeq 500 could be billed “the HiSeq in a MiSeq” and will complete a 300 cycle run in 30 hours, available now for $250,000. Both systems, which make use of flowcell innovations and major changes in SBS chemistry discussed below were covered in quite some detail by GenomeWeb.

HiSeq X Ten: Illumina are making big news that this instrument(s) will finally deliver the holy grail of the $1,000 genome. Initial customers include Macrogen, the Broad Institute, and the Garvan Institute of Medical Research. Illumina says the $1000 genome is “inclusive of typical instrument depreciation, DNA extraction, library preparation, and estimated labor”, we'll have to see if the sums make sense. They talk about “it” when referring to X Ten but this really means them, 10 instruments makes one X Ten. Improvements have been made to optics and chemistry so that HiSeq X Ten runs faster than previous instruments, 10x quicker than the current HiSeq 2500 (although it is not clear if this means HiSeq 2500 can’t go faster or just needs to wait for the 1TB upgrades). HiSeq X Ten also uses new patterned flowcells which use nanowells (I covered an Illumina patterned flowcell patent last year) and new clustering chemistry to generate 6 billion clusters per run, compare that to MiSeqs 25M or HiSeq 2500 high-output's 3.2B.

NextSeq 500: “the HiSeq in a MiSeq” brings the performance of HiSeq 2500 into a desktop instrument priced at $250,000. Again there are advances in optics, fluidics and chemistry to enable this. Users can choose between two output modes: 130M or 400M clusters per run which would generate 120Gb in a PE150bp configuration, or four 30x WGS at a reagent cost of what looks like $4000 according to GenomeWeb coverage. New optics allow six cameras in a single unit one third of the cost of the current model,and now use an LED allowing Illumina to "significantly reduce the size, weight, and cost of the optics". New SBS chemistry uses just two detection channels and "sequencing with half the images" according to Jay Flatley. Other innovations are the new flowcells with larger clusters that are shipped and stored dry, integrated fluidics and new chemistry which is stable for a full run at room temp eliminating the need for a chiller. As the optics and fluidics have been major costs of the Illumina systems these improvements should make the instruments cheaper to manufacture, and more robust saving field service/engineer visits, something I’m sure many users will be happy to see. 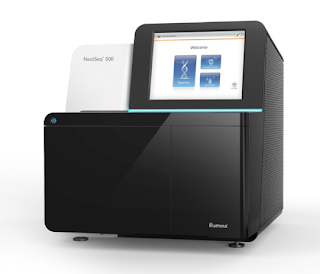 I'm going to digest the announcements and plan a few posts over the next couple of weeks about the new flowcells, the new chemistry and what this might mean for HISeq 2500. My feeling is good news for those who can upgrade to 1TB, depending on the cost, but bad news for those who's instruments are too old.
Posted by James@cancer at 11:29