How long can you store your NGS libraries: DNA adsorption demystified

We've been running Illumina NGS in my lab for six and a half years and have almost 8000 libraries in our -20 going back almost to the start, to number 300 in fact. Occasionally we have users requesting us to rerun these old libraries and we'd normally re-quantify these before putting them back on the sequencer.

More often we get users asking us for another lane a few weeks or months after the first run. In these instances until recently we'd still re-quantify if the last lane was more than a month ago and that meant a lot of extra real-time PCR. Michelle in my group took libraries out of the freezer and compared qPCR results to the original quant. The results were pretty clear, quantification values do not change significantly over a period of up to a year.


Comparing quant over time: Michelle took 26 different Illumina sequencing libraries (ChIP-seq, RNA and smRNA-seq, Fluidigm, WGS, Nextera and "other") between 1 and six months old from our -20 freezers. These were all libraries previously quantified using Kapa Illumina qPCR quant. There were 3-5 libraries at each time point and initial concentration values ranged from 11-80nM with fragment sizes of 150-500bp. Correlation of initial and repeat Kapa quant was very high with CV of 0.96, p-value 0.0001.

We've now adjusted our procedures and only re-quant after six months, and we are very rarely asked to go back that far. So problem solved, but why does DNA concentration change over time?

DNA "sticks" to eppendorf tubes: In the early days of NGS there was a lot of concern about a drop in library concentration over time. I suspect this was as much to do with everyone working out what worked, and what didn't with NGS and the occasional failure being put down to quantitation giving storage a bad name. This was about the time people suggested using non-stick tubes due to adsorption of DNA in the tube being the cause of this drop in DNA concentration.

So what is adosrption: it's when a material creates and holds a thin film of molecules of a gas, liquid or solute on the surface of the material. In the case of an Eppendorf it is adsorption of DNA as a thin film on the inside surface, this adsorption is most noticeable with low concentration solutions where concentration appears to change over time, most likely due to increasing amounts of DNA being adsorbed.

A bit about DNA binding to plastic: The availability of non-stick eppendorfs is down to work carried out in the early 90's, a lot of it by Claire Gallard and Francois Strauss at the Institut Jacques Monod, Paris. A key paper by Belotserkovskii in 1996 built on their work and was the first to propose that it was interaction with the polypropylene used to make eppendorf tubes that caused the issues. Gallard and Strauss published a whitepaper with Axygen comparing 9 different tubes (polyallomer, polyethylene, and polypropylene tube) for adsorption rates. Adsorption of DNA is affected by salt concentration (so DNA in water is best for long-term storage in this respect) and adsorption rates were shown to be 5-25%, imagine losing 25% of your DNA!

The different types of plastic used in eppendorfs can also induce DNA denaturation as shown in figure 2 from the whitepaper. 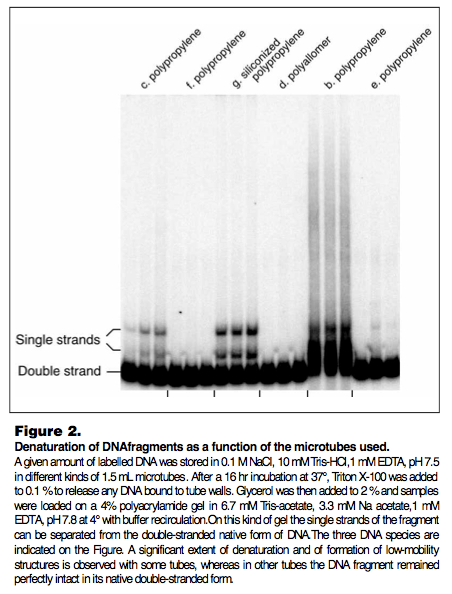 A NIST 2004 DNA Quantitation Study also found that at low DNA concentrations, a significant proportion of the sample DNA binds to the walls of polypropylene tubes.

A 2000 article by Strauss and Gaillard reiterated these results confirming that "the choice of tubes can be very important" and that "ordinary polypropylene tubes cannot be recommended [but] polyallomer tubes and some specially designed polypropylene tubes show none of the [adsorption] problems". Unfortunately they also point out that most tube manufacturers won't tell us how they make their tubes non-stick with respect to DNA in solution.

A (non-exhaustive) selection of non-stick tubes:
We use Ambion non-stick tubes as we were already using them for our RNA work. I'm not sure which tube would be best for NGS, but just being aware of the issue is enough in most instances. It may not be a problem for you at all.
Posted by James@cancer at 07:02