In my last post I wrote about a computational screen of TCGA data and its use in repurposing approved drugs and/or finding new drug candidates for cancer patients. The work demonstrated the possibilities for finding novel treatments, but I also pointed to a cautionary Vemurafenib study that showed poor performance repurposing the drug in Colorectal cancer. As it becomes easier to identify novel therapies in a high-throughput manner, we need to develop methods to test these the are equally high-throughput. CRISPR knock-out or mutation of cancer drivers in multiple cancer cell lines or in tumour xeongrafts is one possibility - but most groups have carried out only a handful of knock-out or genome editing experiments.


A week ago scientists at the Broad Institute published the first genome-wide CRISPR knock-out in Mouse to discover loss-of-function mutations that can drive tumorigenisis. See: Genome-wide CRISPR Screen in a Mouse Model of Tumor Growth and Metastasis (Cell 2015). 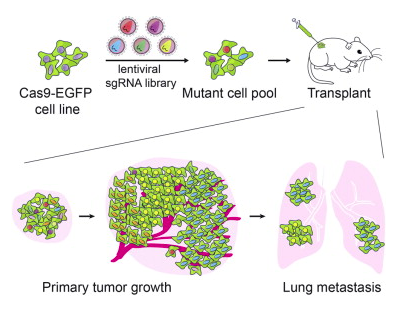 They made CRSPR mutants using almost 70,000 single-guide RNA's in a non-metastatic mouse cancer cell line. By analysing metastases they were able to identify a few enriched sgRNAs revealing loss-of-function mutations in known and novel tumour suppressors that had a role in regulating lung metastasis.

Is CRISPR-based drug testing viable: combining high-throughput CRISPR methods with guide-RNAs targeting the 400+ genes from Rubio-Perez et al with banks of cell lines or patient derived xenografts might allow testing of specific cell/mutation/drug combinations before looking for groups of patients to enrol in basket trials. The number of PDX models appears to be increasing rapidly (200+ at JAX Labs alone). A recent review by Despina Siolas and Greg Hannon covered the challenges in developing and using PDX models as well as the practicalities of sharing these resources. In this they mentioned the NCI's Pediatric Preclinical Testing Program which is developing PDX models for multiple childhood cancers to use in investigations of novel drugs. The PPTP recently reported successful creation of over 60 PDX models, and that two drugs they investigated showed similar response in PDX models as in patients. A separate review in Cancer Letters outlines the status, challenges and potential of PDX's or “Mouse Avatars” and suggests they have "the potential to revolutionize the drug development".

Adding specific driver mutations to complex PDX cancer models might allow us to better determine if a drug like Vemurafenib will work in a wider setting, or if it will most likely fail as in the colorectal case? This approach might run ahead of basket trials in patients, reducing the potential of failure for individual patients.
Posted by James@cancer at 11:23