I realised I'd not covered the recent droplet sequencing papers (the post was sitting in my draft blogs pile) and wanted to make sure I did after posting on single-cell RNA-seq last week. The use of droplets has some benefits over microfluidics where the current leader of the field was, until recently, limited to 96 cells per run. Droplets seem to offer almost unlimited numbers of cells but realistically going past 1000 seems to be beyond the needs of many experiments (do you agree?). And with the release of the upgraded C1 offering 800 cell capacity, the off-the-shelf ease of Fluidigm's sytem is likely to make it popular for a while to come. However the Fluidigm chips are biased in the cells they capture as evidenced by the chips for differently sized cells and the droplet methods lower bias may ultimately win people over.

Droplets are also likely to be much more cost-effective, for the labs that can build their own systems. Drop-seq is around $0.10 cents per cell, compared to $10.00 on the 800 cell C1 chip (according to GenomeWeb). We've also been testing the Cellular Research technology which gets to somewhere in-between with the resolve system. However for ultimate spatial information in situ sequencing is likely to be difficult to beat.

In a Nature Reviews Genetics technology spotlight, Darren Burgess (Associate Editor: NRG) describes two methods, inDrop (Klein et al) and Drop-seq (Macosko et al) that scale single-cell work from hundreds to thousands of cells. Less than 100 cells is limiting as far as single-cell analysis goes and methods are required to easily and routinely capture and process ideally thousands of individual cells. Both methods do this by capturing cells in droplets alongside a bead coated with barcoded primers allowing cells to be differentiated during sequencing. GenomeWeb also covered both methods.

Drop-seq RNA sequencing: Macosko et al use a bead coated with barcodes, made using a similar combinatorial method to inDrop and CEL-seq, that is captured alongside a single cell in a droplet. Amplifiction of the mRNA produces a STAMP (single-cell transcriptome attached to microparticles) ready for sequencing in about 12 hours. In the paper they sequenced almost 50,000 mouse retinal cells and identified 39 distinct cell populations.

By way of comparison to other single-cell methods they analysed the frequency of cell doublets, single-cell purity by using a mix of  Human and Mouse cell-lines. The quality of single-cell mRNA seq decreased as higher concentrations of cells were processed, suggesting that less than 100 cells per ul was optimal. They also assessed the number of transcripts captured and report a conversion efficiency of 12% (slightly higher than inDrop).

See the McCarroll group webpage for details on how to build your own Drop-seq system. 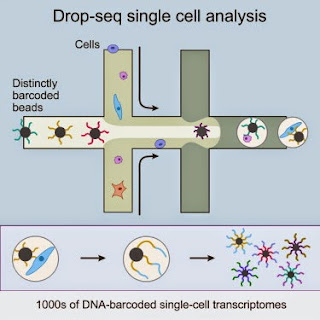 inDrop (indexing droplets) RNA sequencing: Klein et al use a hydrogel "bead" containing barcoded primers to make single-cell barcoded RNA-seq libraries from thousands of cells at a time. In the paper they sequenced over 10,000 cells to compare pluripotent and differentiating mouse ESCs and found rare subpopulations and heterogeneity in differentiation timing. They also discuss the pretty poor efficiency of mRNA capture (only 7%). 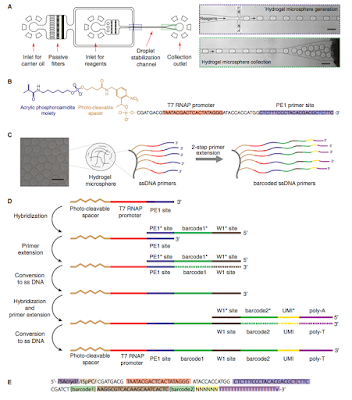 These are excellent papers and well worth reading, the descriptions of the dropletisation, molecular biology and analysis are very detailed. The people that wrote these papers very obviously put a lot of effort in. Hopefully both of these technologies can be easily adapted to other sequencing applications.

These, and other, single-cell methods seem to suffer from pretty poor efficiency of mRNA capture which might suggest they are most applicable to medium to highly expressed transcripts. This is sure to improve, but for very low expressed transcripts bulk sequencing might still have a place.