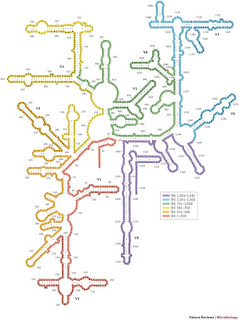 Experimental workflow: 1.5kb amplicons were generated from 16S rRNA gene sequences for 20 different species present in the mock community using a universal PCR. Amplicon library prep was performed using NEBNext End Repair Module and NEBNextdA-tailing module to prepare blunt-end amplicons for adapter ligation. Sequencing was on an R7.3 flowcell with a 48 hour run with an additional library loading at 12 hours. Read QC and conversion to FASTA was performed with poretools and poRe. And they also discussed the "What's In My Pot" Metrichor workflow demonstrated at ASHG, showing that MinION can deliver real-time analysis making the "run until" mode an attractive one for some applications.

Results: Most reads were around the size of the amplicons (median 1.1kb) but they did see some very long reads (max 50kb) speculated that these were amplicon:amplicon ligation products but they were not able to align these. In the reported analysis they filtered the MinION reads to keep only those that were 100bp-2kb, retaining 97% of data (3,297 reads). The 2D reads were discarded due to having "a detrimental effect of 2d reads in the quality of assembled sequences"; given that others are reporting that 2D reads are what we should be aiming for I'd have liked some explanation as to why these were so bad.

They were able to reconstruct more than 90% of 16S rRNA gene sequences for all organisms included in the mock community. However quantitation data was less convincing and the data in figure 1 do make me wonder how applicable this method/tech might be to quantitative or longitudinal analysis. The mock community contained equimolar ratios of 20 rRNAs yet results varied by up to 100 fold, although the authors only considered a coverage bias was present if it was more or less than 10 fold from the expected value. I have no idea what allele frequency is usually tolerated in these kind of experiments.

MinION currently generates a relatively low per-base sequencing accuracy but the additional read length here helps in resolving 16S rRNA to a species level. A nice dynamic figure would be an evolutionary tree of species showing how resolution changes with accuracy and length would have been great!

MinION methods are developing rapidly and I wonder how long will it be before full length 16S rRNA is reported?
Posted by James@cancer at 20:44