ChIP-seq can only really work if you have a good antibody for the protein of interest. Any non-specific binding is going to add noise to your data making motif finding, differential binding analysis difficult or even impossible. Back in 2008 Mathias Uhlén's group at the Royal Institute of Technology, Sweden, published a study that showed how less than 50% of antibodies tested were specific to the target. 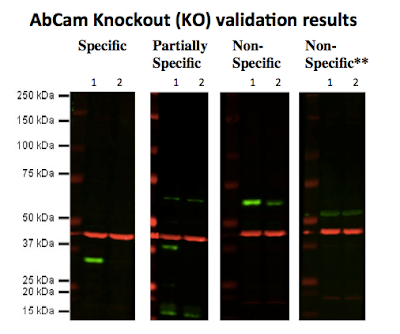 In February this year Andrew Bradbury and Andreas Plückthun wrote a comment in Nature on the problems this causes. Bad antibodies were blamed for the very high failure rate in replication of published studies, and the authors estimated some US$350 million was being wasted in the United States each year. They called for international collaboration and funding to validate antibodies through sequencing, and the use of only recombinant antibodies. Whilst this is a great start the sharing of data on antibodies by users is likely to go a long way to highlighting those that work and those that do not.

AbCam to the rescue - sort of: AbCam are now introducing knockout validation for antibodies as a standard QC procedure. It is likely to take some time to get their whole back-catalogue validated this way but if people buy more antibodies from AbCam than their competitors market forces will push others into improving validation processes. Ultimately we spend a lot of cash on antibodies, certainly the number of ChIP-seq libraries run through my lab would suggest an awful lot is being gobbled up to understand genome dynamics.

AbCam are using the CRISPR/Cas9-based human knockout library to verify that their antibodies are specific. This method guarantees there is no expression of the target gene/protein and confirms antibody specificity pretty well compared to other methods. They have some very clear gel images showing what sort of results are obtainable from "specific" to "non-specific" (see image above), and also provide a table below help interpret the results, what we are doing about it and what it means to you.

​Abcam is aiming to validate 500 protein targets a year using this knockout approach as part of their antibody validation. Look for the logo below for knockout validated products.