I updated my Google Scholar account today and saw that a paper I was a co-author on has had over 1000 citations: The genomic and transcriptomic architecture of 2,000 breast tumours reveals novel subgroups! This now puts it up near the top of Natures paper mountain, although still behind Watson and Crick's 1953 paper. The main reason I am writing about this here is not self-promotion (there were 33 co-authors, and I was part of the METABRIC group - itself a collection of around 80 other co-authors), but rather a chance to discuss how we might approach this with RNA-seq as opposed to the Illumina microarrays we used. 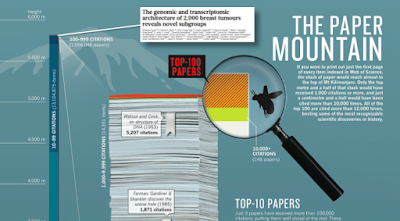 METABRIC: The Nature 2013 METABRIC paper (Molecular Taxonomy of Breast Cancer International Consortium) described the analysis of over 2000 breast cancers using copy-number profiling (on Affymetrix SNP6.0 arrays), and gene expression (on Illumina HT12 arrays). It highlighted the molecular complexity of breast cancer in a way not previously revealed and stratified cases into one of ten distinct molecular clusters (IntClusts), that had different outcomes. Read the paper, or the CRUK blog for more info.

Microarrays not RNA-seq: The METABRIC paper was published in 2013, but the ground work began in 2006, in fact this project was a deciding factor in my taking on the role of Genomics core facility head at CRUKs Cambridge Institute. Back in 2006 only a very small number of people were working with NGS and no-one for RNA-seq (the first RNA-seq paper was not published until 2008 Nagalakshmi et al: Science). Microarray gene expression analysis was the state-of-the-art and we had invested in Illumina's beadarray technology rather than the more common Affymetrix chips).

We planned the microarray processing incredibly carefully, it took months to decide on how samples would be randomised across plates, how extractions would be performed, etc. In the end we processed around 2000 arrays in the first round. To increase the quality and comparability of data across the project the whole lot were processed in one six-week batch (we did no other array work during this time), and all the samples were prepped as labelled cDNA by one person*. An additional 900 arrays were completed as follow up, some repeats, some new samples.

Illumina's HT12 array really made the microarray processing much simpler. 12 samples were hybridised on one array with a full 96-well plate being run each day. All arrays were run as a batch and scanned overnight. I'm sure we could have got away with an HT24 format, and if this had been available then the costs might still be competitive with RNA-seq.

Doing it all again with RNA-seq: We are just completing a 600 sample RNA-seq project using our Agilent Bravo and Illumina TruSeq stranded mRNA-seq kits. The processing is pretty straightforward and we can go from RNA to a normalised pool of 96 samples (actually 88 but don't ask why) for sequencing in about a week. Our normal project size has increased each year, and although 600 is still large, we usually process a batch of RNA-seq samples every week or two.

But what really amazes me is that we can sequence 2000 samples for high-quality and sensitive mRNA gene expression in a little over three weeks on our HiSeq 2500, probably even quicker on the newer HiSeq 4000. We'd also be able to go back to specific samples, or sub-groups, and sequence deeper to look into alternative splicing.

RNA-seq continues to develop with newer kits, better analysis of non-coding transcripts and development of methods to call mutations and isoforms. Recent advances like the SEQUEL from PacBio offer the chance to directly count isoforms rather than infer them from short-reads. And who knows how soon RNA-seq on the MinION will be a reality for the masses?

Microarrays not CNV-seq: We processed all the samples for METARBIC copy-number analysis through Aros in Denmark using Affymetrix SNP6.0 arrays. But we have been using low-coverage whole genome sequencing for a number of years now as part of our exome capture pipeline. Pre-cap libraries are pooled for very low coverage sequencing (about 20M reads) and analysed with QDNA-seq (Scheinin et al: Genome Research). We spent probably over £1M on Affy SNP6.0 arrays versus about £100,000 for sequencing . The sequencing workflow is similar to RNA-seq and we'd be able to zoom into specific samples, or sub-groups, to get a better handle on those that are driven by copy-number changes. We'd also be able to detect other structural variants.
Big projects can present many challenges and I am sure the authors that prepared the METABRIC paper had to defend against the use of arrays just as RNA-seq was starting to gain traction. It can be difficult to decide which technology to use, I am certain that we chose the right things for METABRIC, but that choice was one made after lots of discussion. If you're planning a big project, or even a very small one, take the time to think about the methods your using, their biases, and yours, before starting the lab work.

*Many thanks should go to Michelle who did all the sample prep. She was pregnant at the time and left shortly afterwards to have her baby, and for a well earned rest! Michelle left the lab in 2014 and now works at Iniviata.