BBC gender equality issues: how do women in science fare?

As part of the BBC's 100 Women Season, they've been putting up some content that allows you to see how equally different countries treat men and women. One of these is the gender equality calculator and according to the Beeb "the UK is among the most gender equal countries in the world". It ranks 18/145 with Iceland top of the league, and Norway, Finland, Sweden and Ireland occupying the rest of the top 5. I was interested to see how equally men and women fared in the sciences, and there is near parity in the numbers graduating from University. However the figures are not so great if you dig into some of the source data... 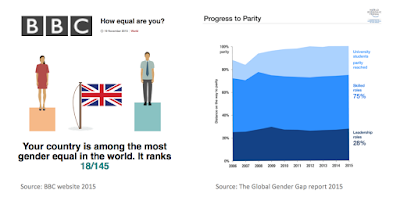 The figures are based on the World Economic Forum (WEF)'s annual Global Gender Gap report, which measures countries according to where women are more likely to be able to participate fully in political and economic life and enjoy the most equal access to education and healthcare. The World Economic Forum clearly shows how few women make it into leadership positions after leaving University (see graph above). Others have shown this to be the case for a while.

Nature published a commentary article in 2013 from Isabelle Vernos chair of the ERC gender-balance working group (GBWG). This highlighted the fact that only 36% of mid-ranking, and just 18% of full professors in Europe were women, despite the equality seen at coming out of University. The article discussed implementing a range of bottom-up and top-down measures to address this imbalance. Back then ERC only had 25% of their applications coming from women. And their success rate is marginally lower too at just 10% versus 12% for men, the article pointed to similar observations at EMBO, and suggested that this is unlikely to be due to unconscious bias amongst the panel members, most of whom are blokes.

The UCU has also called for equal pay for women, they name and shame the worst offenders. There is only a 1.5% pay gap for Professors at the University of Cambridge, so once you make it as a female Prof at Cambridge you can be assured you're not being stiffed in your pay-packet!

Why not look to see how your University fares - here. Be careful: the numbers in the table need careful consideration and probably more explanation too; the University of Cambridge is missing data on one group of academics and has an apparent 17% pay gap in the "academic total" table that is not easily explained by the rest of the data, and this is starkly opposite to the 1.5% gap for Profs.

The Higher Education Statistics Agency has data on lots of things (statisticians love Excel - not), including a table that shows how the gender gap is particularly bad once you get out of teaching and into research. There is almost equality for "teaching only" staff in UK Universities, however for "research only" there are 25% fewer women. Strangely for "teaching and research" the gap is almost 50%. Does this suggest that men are more likely to consider their role as including some component of research, even if it does not? I'm not sure how best to interpret the data, so please add your thoughts and comments at the end of this post.

My own lab has had a gender bias for most of the time I've been running it, of 16 people who've worked for me over the past nine years only 3 of them have been men. Every time I've advertised and interviewd for a post the best applicants have generally been women. It is only in the last year or two that I've started to see almost the same level of quality applications from blokes. As a core-faclity lab the Genomics Core does offer a slightly different environment to work in to a research group, which may be more attractive to women? I don't know. I'll be advertising for a senior role early next year and will do my best to avoid any bias - concious or otherwise! And we're trying to stay at the cutting edge of recruitment as well as Gneonics, so will be looking at using anonymised applications so personal information does not influence the selection process.
Posted by James@cancer at 16:32