What does "cure" mean?

President Obama's "moon shot" to get a cure for cancer has received a lot of coverage, both positive and negative. GenomeWeb pulled together some of this in a Scan article earlier this week: "Is a Cure Even Possible?". This reported on coverage from The New York Times, Scientific American, and others including blogger Whizbang.  The NYT coverage included calls for more funding of cancer research by the US government, and this was also echoed in Whizbangs post - both were making the case for funding basic biology. 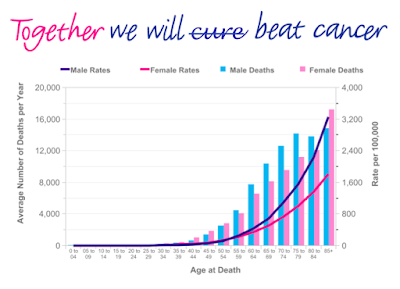 In the NYT piece the group invited to the White House, which included George Demetri (Ludwig Center and Dana-Farber Cancer Institute, and SAB for the CRUK-CI), was quoted as saying that "Medicare could start paying for sequencing and, as a condition for paying, collect data on patient outcomes". This would indeed be a huge step in collecting genomic data on cancer patients, but it would not be cheap. GenomeWeb also quoted Demetri from the Los Angeles Times describing how cancer may not be cured, but be turned into a treatable disease and something people do not fear as they do today.

What does "cure" mean? In the last twenty years I've worked for the BigC, ICRF and today CRUK so have been trying to help "cure" cancer for quite a while. CRUK changed their mission statement from "cure" to "beat" almost ten years ago. I always thought this was a much better word to use as it has different connotations for the public and patients. The Oxford English Dictionary definition of a cure has several examples, all are perfectly reasonable but don't necessarily mean what might be thought of as cure.

Cancer is unlikely to ever get a magic bullet. However it is already a disease that a lot of people die "with" rather than "of". This is often unreported in the media, but cancer is primarily a disease of old age and more than three-quarters of cancer deaths occur in people aged 65 years and over, and more than half in the over 75s.

The funding CRUK raises, over £500M (half of which comes from the UK public via direct charitable giving or lagacies), goes to over 4000 scientists and some of it funds my lab. We're pushing hard on the genomics front to help beat cancer. It is a great job, and a great organisation to work for - although as one of our senior group leaders used to say "we should all be working towards making ourselve unemployed"!

The public view of CRUK is often the shops on the high street. We've done lab tours for many people working in these shops, and I have a favourite story which came from one of these visits: a very old lady on the tour, who had been volunteering in a  CRUK shop for twenty years, asked how much one of our Illumina sequencers was, I said that they were about £500,000 each; she turned to her friend (an even old lady) and said "we're going to need to sell a few more shirts"! I think that sums up the public mood in trying to find a cure better than anything Obama or Cameron can say.
Posted by James@cancer at 15:59