Beth Shapiro:
Beth Shapiro (@bonesandbugs) talked about "the rise and fall of passenger pigeons", which went extinct in 1914, prior to this rapid decline there were lots of them, described as "an infite number of them" in 1534, but "massive flocks" were efficiently trapped/shot and the species rapidly declined to zero.

Beth posed the question "How did that happen?" seems to be the same answer for other recent extinctions or near-misses - massive over hunting by us.

Passenger pigeon genomics turns out to be difficult, it is being done on passenger pigeon remains in museums, but very intersting. Due to the DNA fragmentation de novo genome assembly is not possible so they are using the band-tailed pigeon genome as a reference. This was sequenced with Dovetail Genomics, generating an N50 of 20Mb using Chicago library, see the recent paper Chromosome-scale shotgun assembly using an in vitro method for long-range linkage, from Beth's husband.

Stepha Schuster:
Stephan Schuster, Nanyang Technological University “Why ethnicity matters for precision medicine”. Talking about migration of people across three timeframes, the Pleistocene, historical times and more recently. Showed the consensus on African migration over the last 50,000 years. Pointed us to worldpopulationhistory.org some very cool interactive tools to visiaulise human population. The UK does not appear on the map till 1000AD! 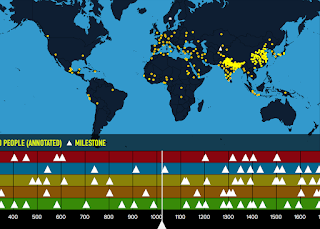 Stephan used the genome of Archbishop Demond Tutu as an example of the poor results from self reported ethnicity. This is likely to be important in precision medicine initiatives in making sense of variants in indivduals, "each individual has their own history". South East Asia "has an unexpected and unprecedented amount of diversity, almost the same as seen in Africa" - where does this come form, what is the explanation?

He showed a few examples in personalised medicine OCT1, MYBPC3, both clinically relevant genes with very different ethinc variation. This will be scaled up in the GenomeAsia100k project, there is a press release coming out this afternoon (ten minutes ago on PRnewswire). It is a non-profit which will generate genome information for Asian population. Already sequenced 2000 genomes. It will cover populations from 12 South Asian and 7 North and East Asian countries. Aiming to generate phased reference genomes. This will be combined with micro-biome, clinical and phenotypic data.
Posted by James@cancer at 22:06