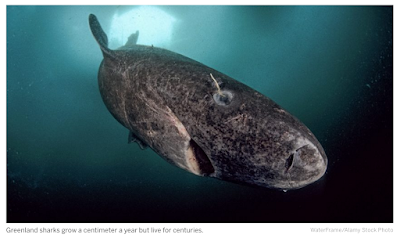 “Who would have expected that nuclear bombs [one day] could help to determine the life span of marine sharks?” The authors used measurements of 14C radiocarbon isotopes in eye lens nuclei to estimate life span of around 300 years, with the oldest animal approximately 392 years old. A complication in their analysis was the “bomb pulse”: the the pulse of carbon-14 produced by nuclear tests in the 1950s. This creates a spike in radiocarbon levels, however only the two smallest, and presumably youngest, of the 28 animals analysed had the high 14C levels associated with the bomb tests.

Why eye lens nuclei? It turns out that the lens is made from metabolically inert crystalline proteins, and the nucleus, which is formed during prenatal development, retains proteins synthesised at age 0.

No sex until you're 150: But this longevity comes at a price though, and for the Greenland shark the price is that sexual maturity is not reached for a very long time - around a female sharks 156th birthday!

Animals that live this long are rare, and horribly susceptible to Human activities; primarily fishing, shipping and pollution in the case of marine vertebrates. Most of animals used in this study came from several years of collecting dead  sharks, many of them accidentally ensnared when trawling for commercial catches.
Posted by James@cancer at 13:21