The UK recently approved an NIPT test to screen high risk pregnancies for foetal trisomy 21, 13, or 18 after the current primary screening test, and in place of amniocentesis (following on from the results of the RAPID study). I am 100% in favour of this kind of testing and 100% in favour of individuals, or couples, making the choice of what to do with the results. But what are the consequences of this kind of testing and where do we go in a world where cfDNA foetal genomes are possible? 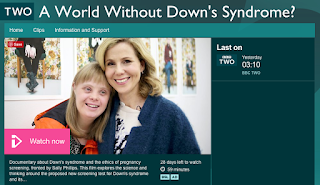 I decided to write this post after watching "A world Without Downs", a documentary on BBC2 that was presented by Sally Phillips (of Bridget Jones fame), mother to Olly who has Down's syndrome. She presented a program where the case for the test was made (just), but the programme was very clearly pro-Down's. Although not quite to the point of being anti-choice.

My own personal experience of Down's is limited, and I'd watched the documentary more out of excitement to see how NGS is being rolled out across the NHS; particularly because the same technology is being applied in Cancer and is likely to transform patient treatment. My view before watching was that this new NIPT test could only be a good thing. The program made me see that there are likely to be unintended consequences of this kind of testing, and that there may be darker sides to the use of the technology. It made me think more carefully about the issue, but in the end I'm still 100% in favour of the test.

Unintended consequences of cell-free DNA testing in have been reported previously, with the discovery of cancer in an expectant mum first reported in 2013. How we deal with these issues is a matter of ongoing debate. For Down's the program highlighted the negative way expectant mothers and fathers are given the news that they may have a Down's child; and that better information can only lead to a more informed choice - not difficult to agree with that. Unfortunately the program can't escape it's Herodotian title. This test won't lead to "A world Without Downs", but how people use the information might.

I'd highlighted the program on Twitter after watching it. And posted again after reading an article in the Guardian "Fears over new Down's syndrome test may have been exaggerated, warns expert" where Prof Sir David Spiegelhalter was quoted as saying that terminations would not go up - based on the current models being used. I did not disagree with his stats (I'd be crazy to do that), but models can be wrong, and that was the basis of my Tweet.

The main argument from Phillips in the program is that this test will result in more terminations, and that means fewer people being born with Down’s syndrome. She visited Iceland, which she stated has not had a Down's syndrome child born in the last 5 years. This is surprising as I'd expect a country like Iceland to have a testing regime with as many false-negatives as anyone else - a few Down's children should have been born...and data from the WHO seem to suggest this is indeed the case.

Ultimately even if 100% of parents did choose to abort after receiving test results, as long as they were well informed before making their decision, then we've done the right thing. Haven't we?

Trisomies 13, 18 and 21 are the only things tested for right now. But the underlying technology could ultimately use whole genome sequencing and find the full spectrum of genetic abnormalities: such as an increased risk of psoriasis, glaucoma, and Alzheimer's. If my mum had decided these were not traits she wanted her baby to have I'd not be writing this blog.
Posted by James@cancer at 11:34