Is there a future for semi-conductor sequencing?

The reason I wrote this post is a video I saw from Panasonic on Gizmondo, my new favourite website. However I'm going to leave the Panasonic bit to the end of this piece.

Ion Torrent set AGBT on fire in 2010 with the release of the PGM, the worlds first semi-conductor sequencer. They made such a big splash that Life Technologies bought them on the promise of delivering "greater than Moore's law" improvements. Moore's genome published in the Summer of 2011 proved how much they have come along.

The promise of semi-conductor sequencers has always been that they will scale in the same way as the processors in our Mac's and PC's. For now Illumina are pushing the envelope of what is possible in sequence space with HiSeq 2500 leading the charge, but what does the future look like?

Are we waiting for Nanopores to conquer all, or are semi-conductors about to take over the world?

Roche bail-out: I was surprised, and disappointed, when Roche announced dropping their development of semiconductor and nanopore sequencing. Earlier in the year they made positive noises about how development was proceeding "expect 454 read-lengths and many millions of them" was the message I got. Roche have also just majorly reshuffled the other sides of their NGS business by consolidating 454 and NimbleGen. What is Roche doing, do they know something we don't, was Illumina really not worth $60 a share?

I had high hopes that Roche's own semi-conductor sequencer developed in collaboration with IBM or DNAe would bring additional competition into the NGS space. The simple message behind semi-conductor NGS has always been the power of the semi-conductor industry with Moore's law development rates. I was looking forward to buying a cheap and robust semi-conductor sequencer for validation studies (orthogonal's always nicer), smaller genomes and perhaps amplicons and exomes in a doctors surgery. But now there is little competition, PGM seems to be finished with development and Proton is not going as fast as Ion Torrent started on the 314-316-318 chips. A genome for $1000 on Proton is a long way off.

But the future's not too bleak; semi-conductor sequencing got a kick up the charts with a couple of developments, first the AmpliSeq exome and second DNAe's "qPCR-like" diagnostics.

Ion AmpliSeq exome: a PCR-fest in 12 tubes! My wife knows all about PCR, in fact she still asks me if I've been doing "PCR and gels" when I get home from work (I spent two years AFLP cloning a wheat disease resistance gene in the late '90's!)

You can find out more about the AmpliSeq Exome on the LifeTech website where you can watch their promotional video or download a flyer and technical note. GenomeWeb coverage starts with the headline Life Tech are pushing, "exomes in 6 hours", unfortunately it is not as simple as this once we dig behind those headlines. The capture is done in 6 hours but the whole process takes 25 hours (still fast not not such a great headline). And this is for a trio.

On the promo video Andy Felton, Head of Product Marketing, introduces the new kit as "exome enrichment that's as simple and fast as PCR" with library prep requiring less than 60 minutes hands-on time and the ability to run 24 exomes per week on Proton P1 chips. The kit requires just 50ng of input DNA, which matches Illumina's rapid-exome product. And the data presented in the video, flyer and TechNote suggest good performance; 90% coverage uniformity, 90% on-target (hey it's PCR of course this should be high!) and an exome trio on a P1 chip it was possible to get >85% of bases at 20x coverage, pretty cool! The system also allows automated variant calling and annotated variants in 10 hours using "push-button" software.

Dale Yazuki has an excellent post over at Next Generation Technologist which includes a look back at exome technology development from Vogelstein's Sanger-seq exome, through arrays to in-solution capture. Dale works for LifeTech but is very good at writing without too much bias and is quick to point out where he may be conflicted (I hope most readers of this blog would say the same for me), however on this post Dale misses out Illumina's TruSeq exome product entirely. A bit too much of an oversight!

The AmpliSeq Exome coverage from LifeTech includes a comparison to other exome products; Illumina's Nextera rapid exome and Agilent's HaloPlex exome (I did not even know they had an exome, but of course GenomeWeb did)! The comparison looks great for AmpliSeq but lets not forget this is a marketing slide. 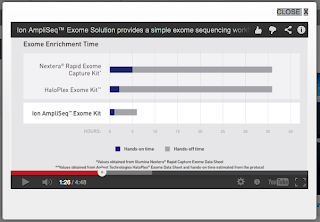 I'm sure others will compare these exome products and publish their results so I don't want to go into details here. However I can't leave the very obvious (and highly unfair) comparison to Nextera rapid exome unchallenged. A Nextera rapid exome allows 96 exomes to be made in 2 days and sequencing to be done in 24 hours on HiSeq 2500. I'm not sure how many exomes you can run on a 2500 flowcell, but I'm sure its more than 8 per week. When deciding the best way to run a large exome project I'd recommend you take a good look at the workflows of each offering as well as price and quality of data.
DNA electronics "Genalysis": Plug your cartridge into your phone and get real-time data on gene panels, check out the video on the DNAe website.

DNAe or DNAelectronics, are the orignal patent holders behind the Ion Torrent chips. They licensed the technology to Ion and have continued to develop it themselves. Their "Genalysis" platform uses a real-time PCR where the detection is based on hydrogen ions released during amplification. Panels of targets are designed and loaded into a chip, a DNA sample is loaded and qPCR detects the presence and starting copy of the target. "No heatblock, no dyes, no optics or excitation".


DNAe are hoping that Genalysis will allow unskilled users to perform molecular tests any time, anywhere, anytime on a pipette-free, lab-free system "which redefines point-of-care nucleic acid testing". They are looking for partners now. I certainly hope to see more form them at AGBT in February. Find out more at GenomeWeb.

Panasonic's SNP analyser: This is the whole reason I wrote this post. I stumbled across this video from Panasonic on Gizmodo and over at DiginfoTV they give a more in-depth coverage of the technology announcement.


IMEC and Panasonic first announced their SNP detecting chip back in 2010. The news piece on their website has some cool pictures. IMEC manufactured a microfluidic chip with a miniaturized pump, a micropillar filter for DNA separation, PCR and an electrochemical SNP detector. The DNA micro-pillar array filter is a deep-UV patterned silicon pillar array consisting of  20µm high micropillars and uses ion-pair reversed-phase (IR-RP) liquid chromatography to separate out short, double stranded DNA strands at 50bp resolution. The system can run 5 SNPs at the same time using just 0.5µL of blood in one hour. They optimised thermal separation to develop a high-speed PCR, where 30  cycles are completed in 9 minutes. Panasonic are aiming for point-of-care like DNAe, "Ultimately, we'd like to make this system battery-powered. We think that would enable genetically modified foods to be tested while still in the warehouse. 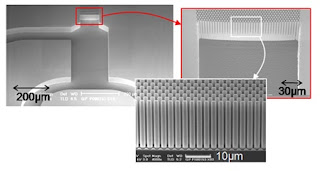