10X Genomics were one of the stars of the show at AGBT15, this year they're bowling attendees over with new developments. They've obviously had an awfully busy year. They announced lots at JP Morgan (GenomeWeb, Core-Genomics). I got a sneak peak (as did Keith at OmicsOmics) to their announcements just prior to AGBT and am happy to share it with you now. 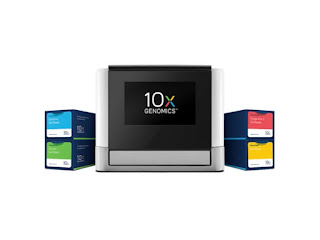 Chromium Genome: 10X want to deliver not just whole genomes, but full genomes. Their aspiration is to allow users access to genome sequence from bp resolution up to a karyotype in a single library. And lets not forget this is from 1ng of DNA. Three major updates improve the original GemCode system -

1) new biochemistry uses high-molecular weight DNA to create NGS libraries (Fig A below). The uniformity of coverage is much more similar to TruSeq PCR-free (Fig B) and as a consequence this reduces sequencing requirements to much more like a standard read depth (Fig C) and generate high quality variant calls (Fig D).

3) the new chemistry produces smaller libraries without the need for Covaris (everyone seems to be side-stepping sonication where possible), and a SPRI cut removes the longer fragments making the libraries compatible with X Ten. The library insert size is tuned to 300bp for XTen ready for 2x150bp sequencing. A new in-line molecule barcoding strategy works on the X platform with a standard r1:i1:r2 sequencing run (Illumina seem to be very slow to move to dual-indexes). And the index has increased from 14bp to 16bp allowing >4 million unique barcodes. 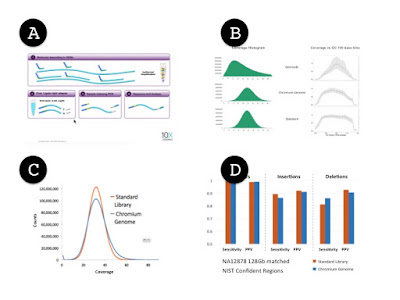 Improvements over GemCode and TruSeq: The original GemCode did a number of things well primarily long range phasing and Chromium is significantly better. Phase block average is now >10MB and their slides today showed a 50kb phase block in NA1287 at 38x coverage with over 97% of SNPs phased. The Chromium genomes have much better genome coverage and GC bias than before and compare well to standard TruSeq PCR-free, and at similar coverage rates to Illumina, previously GemCode required significantly higher sequencing depth.


The Chromium genome delivers an increase in SNP sensitivity, with the new algorithm calling SNPs in regions inaccessible by BWA. 10X also talked about the fact that they are still not really using haploid SNP calling methods, which will most likely improve things even more significantly - if you care about SNP phasing you're likely to be impressed. 10X have introduced new algorithms for alignment of linked reads and assembly - Lariat and SuperNova respectively.

Lariat is a new algorithm for alignment of linked reads. 10X showed the causal variant in a Mendelian disease (Diamond Blackfan anaemia) called using this new algorithm, which was a 1.2kb deletion, demonstrating how phased information can have a large impact on causal variant screening. The figure below shows how without phased reads this deletion is impossible to see (Fig E below), but with the use of phasing information the deletion is revealed (Fig F), and by splitting reads into haplotpyes becomes clear (Fig G). This is likely to add tremendous power for deletion copy number regions, and InDel calling should improve significantly over current methods.

1M droplets allows resolution of more complex regions and 10X have been pursuing a de novo assembly approach with a new "SuperNova" Assembler that delivers the worlds first diploid assemblies. In their workshop they presented results from a single library on X-Ten whch generated 10Mb de novo assembly and diploid resolution. As a demonstration of where this can be applied they chose to focus on the MHC region and showed a de novo assembly of the HLA-A region (Fig H). They reported that compared to a velvet assembly many more regions are recovered. 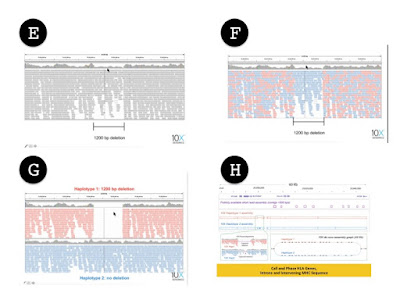 Chromium Exome:  Using the new Exome kits you can now call and phase across the  exome and identify cis/trans relationships. The technology allows detection of variants in genes inaccessible to standard short-read libraries. The low DNA input kit makes high quality libraries from 1 ng of genomic DNA. 10X have been working in-house using an Agilent capture kit, but are in conversation with other enrichment providers. There is no reason why there technology should not work with any of the capture providers - including the new method from Directed Genomics being presented by Cynthia Hendrickson in NEBs workshop on Saturday at 11 “A novel fully customizable hybridization-based enrichment technology integrating capture and library preparation.”

10X have added baits to help with the pull down of long fragments, particularly in the regions that are not usually captured well e.g. poorly mapping exons. They use tiled probes to create a "linked read bridge" inside introns of genes as a scaffold to pull down the genome across the gene body, and optimise the baits, biasing them to common SNPs.

They showed some very exciting early access data presenting a compund heterezygote in Niemann Pick disease, and also CFTR gene mutations in trans but separated by 28kb. They've also been looking at BCR-ABL gene fusions where the intron is very long to better understand the structural context, EML4-Alk fusions, etc. This could be very successfully applied in the TMPRSS2:ERG fusion in prostate cancer.

Expect lower Exome pricing with the launch of the new Chromium kit. Read the press release and GenomeWeb to find out more.

Chromium Single Cell: 10X have modified their technology to capture up to 48,000 cells in 10 minutes for a pretty simple RNA-seq workflow: capture cells with beads, release RNA, oligo-dT primed cDNA to get a 3' mRNA-seq library (Fig I below). Importantly they stated that 90% of droplets contain GEL beads (Fig J), around 50% of the cells put into the system generate useable data, which will be important in rare cell populations. They presented data from 4000-5000 cell PBMC and breast cancer cell-line experiments to show what the system can do (Fig K). And technical experiments using Human:Mouse cell mixes, which showed lovely separation of cells from alignment of RNA-seq data, and more observed genes per cell that DropSeq or InDrop (Fig L). Doublet rate of around 1% for 1000 cells. No need to run different product of different cell sizes, essentially insensitive to normal variability in cell size (up to 30uM) - this could turn out to be a killer feature for single cell.

As if phased genomes and exomes weren't enough, with single-cell as well the Chrominum box looks like it'll be anything but a white elephant in the corner of the lab. 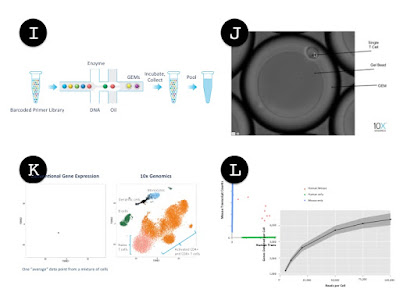 Should everyone use 10X: I think it may be overkill for many projects, but given the cost of repeating something later on I'd think carefully if someone came to me with a genome project about whether to incorporate 10X as the default library prep. It would allow users to get closer to "complete" genomes, and in cancer to have the best chance to understand structural variation.An additional $450 on top of the whole genome costing just $1000 sounds a lot, but given the efforts in validating variants, particularly which genome they come from, and exactly what sort of structural variant is present, it may be worth the extra outlay.

Illumina may also be thinking that 10X on X Ten is a perfect partnership (beats Moleculo), a press release about a co-marketing agreement came out a couple of days ago. The combination would increase the $1000 genome to $1450, but this may be a price well paying for many projects - and it is still significantly cheaper than any other de novo sequencing method.

However de novo sequencing of genomes is not my particualr expertise so I'll steer clear of comparing to a PacBio assembly and leave that to people in the know.


The full commercial release of Chromium is expected in May.
Posted by James@cancer at 20:48