How do SPRI beads work?

Someone recently asked me, “how do SPRI beads work” and I realized I was not completely sure so I went to find out.

My lab uses kits. Lots and lots of kits; kits for DNA extraction, kits for PCR, kits for NGS library prep and kits for sequencing. Kits rock! But understanding what is going on at each stage of the protocol provided with the kit really helps with troubleshooting and modification. How many people have added 24ml of 100% Ethanol to a bottle of Qiagen’s PE buffer without stopping to ask what is already in the bottle? The contents of the PE bottle are… answer at the bottom of this post.

I hope this post helps you understand SPRI a bit better and think of novel ways to use it. I’d recommend reading A scalable, fully automated process for construction of sequence-ready human exome targeted capture libraries in Genome Biology 2011 for the with-bead methods discussed at the bottom of this post. I am sure we'll all be using their method a lot more in the future!

You are most likely to come across SPRI beads labeled as Ampure XP from Beckman.

How do SPRI beads work? Solid Phase Reversible Immobilisation beads were developed at the Whitehead Institute (DeAngelis et al 1995) for purification of PCR amplified colonies in the DNA sequencing group. SPRI beads are paramagnetic (magnetic only in a magnetic field) and this prevents them from clumping and falling out of solution. Each bead is made of polystyrene surrounded by a layer of magnetite, which is coated with carboxyl molecules. It is these that reversibly bind DNA in the presence of the “crowding agent” polyethylene glycol (PEG) and salt (20% PEG, 2.5M NaCl is the magic mix). PEG causes the negatively-charged DNA to bind with the carboxyl groups on the bead surface. As the immobilization is dependent on the concentration of PEG and salt in the reaction, the volumetric ratio of beads to DNA is critical.

SPRI is great for low concentration DNA cleanup that is why it is used in so many kits. The reagents are easy to handle and a user can process 96 samples very easily in a standard plate. Alternatively the protocol can be easily automated and tens or hundreds of plates can be run on a robot in a working day. The binding capacity of SPRI beads is huge. 1ul of AmpureXP will bind over 3ug DNA.

Size-selection with SPRI: Again the concentration of PEG in the solution is critical in size-selection protocols so it can help to increase the volume of DNA you are working with by adding 10mM Tris-HCL pH 8 buffer or H2O to make the pipetting easier. The size of fragments eluted from the beads (or that bind in the first place) is determined by the concentration of PEG, and this in turn is determined by the mix of DNA and beads. A 50ul DNA sample plus 50ul of beads will give a SPRI:DNA ratio of 1, as will 5ul pipetting (but much harder to get right). As this ratio is changed the length of fragments binding and/or left in solution also changes, the lower the ratio of SPRI:DNA the higher larger the final fragments will be at elution. Smaller fragments are retained in the buffer usually discarded and so you can get different size ranges from a single sample with multiple purifications. Part of the reason for this effect is that DNA fragment size affects the total charge per molecule with larger DNAs having larger charges; this promotes their electrostatic interaction with the beads and displaces smaller DNA fragments
.
Broad Boot Camp http://www.broadinstitute.org/scientific-community/science/platforms/genome-sequencing/broadillumina-genome-analyzer-boot-camp 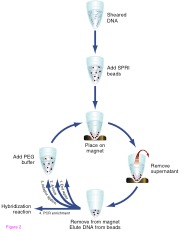 With-bead SPRI cleanup: An incredibly neat modification of SPRI clean-up is the “with-bead” method developed by Fisher et al in the 2011 Genome Biology paper. Rather than using SPRI to clean-up discrete steps in a protocol these are integrated into a single reaction tube method, thus reducing the number of liquid transfer steps. After each step DNA is bound to beads by addition of the 20% PEG, 2.5M NaCl buffer, washes are performed as normal with 70% ethanol but the DNA is not eluted and transferred. Rather the master-mix for the next step in the protocol is added directly to the tube. The final DNA product is eluted from beads for further processing e.g. Illumina sequencing. This modification increases DNA yields in Illumina library prep as multiple transfer steps are removed, reducing the amount of DNA lost at each transfer.


How will you use SPRI in your lab?

PPS: If DNA and Carboxyl are both negatively charged what is happening on a SPRI bead? There appears to be a bit of a black hole in the literature I read through about how the SPRI beads actually work at the molecular level. Digging around some more it appears that the PEG can induce a coil-to-globule state change in the DNA with the NaCl helping to reduce the dielectric constant of the solvent, PEG also acts as a charge-shield. These mechanisms may be behind the "crowding" talked about on other sites. Perhaps someone out there can enlighten me?

Email ThisBlogThis!Share to TwitterShare to FacebookShare to Pinterest
Labels: Methods and applications, Other stuff