I used to ride a BMWR1200RT on my daily commute from Wymondham to Cambridge. What I really wanted was an R1200GS like Ewan and Charlie rode around the world on during their easterly 19,000-mile London to New York trip through Europe and Asia to Alaska and finally New York.

The other evening I was watching "Who Do You Think You Are?" the show where a celebrity is helped along a journey to trace their ancestors. It has been on for coming up to ten years now and there are ten international adaptations on air. It was the episode following Stephen Fry was on where they traced his  family tree to investigate his maternal Jewish ancestry.

Whilst watching I wondered if Ewan MacGregor might fancy combining the two and adding in a bit of sequencing on the trip? We could fit a whole mobile next-generation sequencing lab onto a big BMW and ride around the UK tracing his ancestors and checking out how related people really are to each other. It would not be too hard to fit an Ion Torrent PGM, a One Touch template prep system and a PCR machine for AmpliSeq library prep (using a Human ID kit) all on the back of an R1200GS. With a PalmPCR machine in my pocket and a cool box for a few kits in a pannier the mobile lab is ready to go. 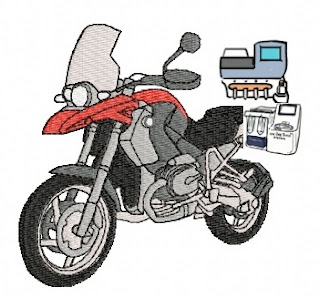 I'd prefer the bike to the Ion bus which is currently touring across the US. And of course if Oxford Nanopore release their MinION at the end of the year I could always use an old Vespa. no need for all the other heavy gear and so much cooler around European streets in the Summer!
Posted by James@cancer at 16:24