A genome, a genome my kingdom for my genome... and is there any horse in that burger?

Two big news stories have been in the headlines in the past seven days. The first is the discovery of Richard the 3rds body, the second is the detection of Horse DNA in processed meat products. Both made me realise they are great stories to engage with our non-scientific mates about, let me know what your friends say down the pub!

Richard III: Last week it was confirmed that a skeleton found under a car park in Leicester, England is none other than the of Richard III. A team from the University of Leicester said analysis of DNA from the bones matched that from his descendants "beyond reasonable doubt". The team used DNA fingerprinting, carbon dating and other methods to try and identify the remains, which showed all the signs of being Richard's body from the description of wounds sustained at the battle of Bosworth. His death ushered in the Tudor's (English readers will be aware of the impact the Tudors had on English and European history, American readers will have seen them as over-sexed royalty on HBO).

The team were able to use mitochondrial DNA from Michael Ibsen who is a 17th-generation descendant working in London. DNA degradation was an issue but the technology to work with degraded DNA is moving at such a rapid pace the=at we might expect a Richard III genome in another year or two. The technology was developed in the lab of Prof Patrick Cunningham at Trinity College Dublin (he is a co-founder of Identigen), and was developed in response to the BSE crisis of the mid-90's.

Q:Is that burger 100% beef? A: Neigh!: DNA has been used to determine the percentage of beef in  processed meats and the scandal is getting hotter and hotter as each day passes. Last nigh on the BBC news Tesco confirmed that trace amounts of Horse DNA were found in processed food.In the same breadth the news reader confirmed that the "trace amount" was 60%! That's marketing for you.

The levels of animal DNA in a product are determined using SNP genotyping or other DNA fingerprinting technologies. The technology used in Ireland that led to the current story comes from Identigen. Their technology allows even highly-processed meat to be traced right back to the farm the animal was reared on. 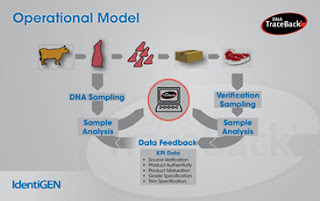 DNA is collected on the farm as well as anywhere in the meat processing chain, samples are sent to Identigen for analysis and compared to their internal DNA database allowing products to be traced back to the farm.

With high-throughput genotyping technologies like Sequenom costing just a few pence/cents per genotype, the cost of a comprehensive SNP panel to ID species is likely to be a less than $1. If you want to cover all the major farmed animals and ID individual animals then I'd expect several 1000's of SNPs would be needed. Comprehensive testing could be performed and it could be incredibly cheap. And there is no reason that this technology could be applied as animals are tagged under current regulations.

DNA fingerprinting is not just for crooks and paternity! CSI meets James Herriot!