I like encouraging people to try to come up with new ideas. One day I want to add 'inventor' to my CV and get a patent, I posted a while ago about an idea that came very close but was pipped to the post by Illumina (although I've still had no feedback about why they have not used their version of the idea!)

But it is not easy turning an idea into reality and get that nice tangible end result, patent, paper or pat-on-the-back. However some times it does not turn out the way you want and I thought I'd post a example of something we thought up a long time ago that is now out there in general use (I know other groups had much the same idea, coming up with a truly novel idea is the really hard part).

The work was completed by Nik Matthews and Kevin Howe in May, 2008.

NB: This post will be followed by occassional posts on work I wish we'd published but never got round to. It's too easy to forget that a lot of work goes on that never gets published but that still has an impact.

Some clustering history: Originally Illumina adaptors were quite different for single or paired-end and smallRNA applications. When clustering Illumina flowcells we used the "cluster station" and each lane was hybridised with a single sequencing primer in a strip-tube with floppy manifolds all over the place. In my lab we have always run a very wide range of sequencing; ChIP-, miRNA-, RNA-, Genome-, Etc-seq; and because of this most of the time we were having to carefully load different sequencing primers into the strip-tubes and make sure neither these, and/or the flowcell, were inverted on the cluster station. Any mistakes in the primer-hyb meant the sequencing first-base would fail requiring a primer-re-hyb.

Improving clustering in the 'Core Genomics' lab: Our idea to resolve this was a simple one, just add a mix of all primers to the strip-tube and only the correct primer will bind (Figure 1).

This modification to Illumina sequencing simplified our cluster generation protocols and reduced the likelihood of manual errors resulting in poor quality, or no sequencing results. Simply mixing standard and smallRNA sequencing primers removed the need for Illumina’s more complex ‘multi-primer hyb’ protocol. And as a by-product this modification allowed sample multiplexing, achieved by mixing two different library types in a flowcell lane and sequencing both libraries with their respective sequencing primers, using alignment to split the samples.


Our results showed no differences between mixed or normal/multi primer hyb and made primer-hyb quicker, easier and less error prone. We successfully mixed the ChIP-seq and smallRNA libraries described above in a single flow cell lane at 10:1 ratio (only a few reads are needed for smallRNA). The increase in sample throughput was achieved at a slight reduction in total sequence yield per sample, but for many applications a single lane now provides sufficient data.

Make sure your flowcell is the right way round: A final modification we'd asked for all that time ago was flow cell that cannot be inverted, the simple addition of a notch to one corner would make it impossible to put the flow cell on an instrument in the wrong orientation. Illumina delivered (sort of) and the current HiSeq 2000 flowcells do have the notch; unfortunately the older instruments don't have the corresponding shape to prevent incorrect orientation.


Checking orientation with the data: We used to get a visual clue to orientation with the first generation of Illumina's live run reports. An inversion of the flow cell could be seen by looking at the cluster density visualisation. The “smile” seen is due to the drop in DNA concentration as the clustering solution moves through the lane from botto to top, resulting in lower cluster density at the ‘out’ end of the flowcell.

We interpreted the images from the Illumina output as a smile for a good flowcell or a frown for a bad one! 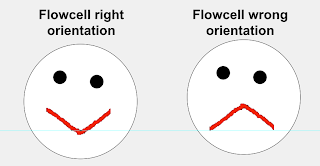 PS: Yes; the wrong orientation frown was one of ours! Everyone makes mistakes.
PPS: To avoid orientation issues we always run PhiX as a 1% spike on lanes 1-7 and 5% on lane 8.
Posted by James@cancer at 12:57