I read an interesting post over at boingboing.net on the use of DNA barcodes and the possible appearance of Dr Spocks Tricorder. 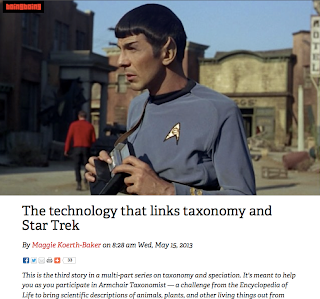 Maggie Koerth-Baker links the Tricorder of 1960's TV to labs like that of Carlos Garcia-Robledo, a postdoc at the Smithsonian's National Museum of Natural History. His project explores the effects of climate change on host plant extinctions and the co-extinctions of associated insect herbivores.

Most DNA barcoding is done using the Mitochondrial CO1 gene, which was chosen by the "consortium for the barcoding of life" as it is highly variable in many, but not all species. Its mutation rate hits the sweet spot of not too little or too much variation from generation to generation. A combination of rbcL+matK genes appears to work in plants (explained in a nice post by one of the authors here), but for Cnidarians (jellyfish) species Co1 happens to work particularly badly so perhaps there's a side-project for someone reading this blog near the sea-side?

What about ONT: Maggie makes a link between DNA barcoding in different environments to the most Star-Trek of NGS technologies, Oxford Nanopore's MinIon. And she hopes that "someday (and probably someday soon), scientists will be able to study changing ecosystems instantly, while they're standing in that ecosystem — just like Mr. Spock" I certainly hope she's right.

I enjoyed the post and did a little reading around the subject finding all sorts of interesting things out. Want to find out more about CO1 and DNA barcoding see here. There were several interesting NGS talks at the IBOL conference in 2011; 36bp sequencing used for deep-sea foraminiferal analysis, optimisation of Illumina HiSeq methods for insect community analysis, DNA barcoding from pooh, and target-capture for DNA barcoding.