At the Illumina Scientific Summit in Berlin last month Prof. Philip Rosenstiel from the Christian-Albrechts-University in Kiel spoke about his work on inflammatory bowel disorder (IBD). He presented a fabulous series of experiments where mouse-models of the disease were used to show the impact of maternal phenotype on litter genotype.

They used newborn mice that were wild-type or mutant for a series of important genes (NOD2 & RIP2) and co-housed these with mutant mice to study the impact of the metagenome on IBD. Some mice were co-housed with mutant mice (CH-WT) others were separated from mutants (SCH-WT) and a control group were housed singly (SH-WT), all groups were treated with DSS to disrupt the colonic barrier. Upon DSS treatment mice developed severe IBD but the unexpected finding was that the CH-WT mice recovered more slowly, and lost more body weight than the SH-WT control group (see figure B from their paper below). 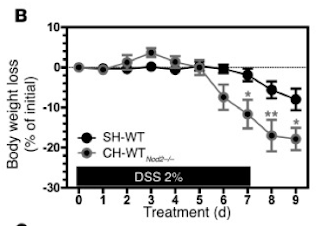 Their results suggest that it is the inheritance of a "disease-predisposing microbiota" that is enhancing the disease phenotype. They followed up on this by looking at the development of colorectal cancer, which is a complication of IBD potentially driven by the inflammatory response to the microbiota. They clearly show that the tumour load of SH-WT mice was statistically significantly lower than that of the CH-WT or SCH-WT groups. 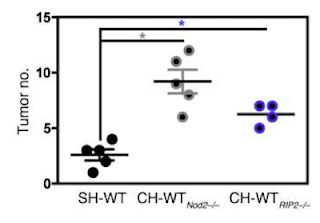 They suggest that the NOD2 & RIP2 mutations work in tandem with a maternally transmitted microbiota to sensitise the mice to IBD and eventually increase their risk of colorectal cancer. And that this enhanced risk can be passed onto wild-type co-housed mice.