More of a fizz than a bang: HiSeq 1TB is now available

Updated after a conversation with Illumina: it turns out pricing for V4 was released early in an email from Christian Henry (Illumina SVP & COO) on Feb 25th. Single end pricing is now compared below and list pricing for all reagents has been used in the comparisons of V3 to V4.

Illumina launched the much anticipated v4 kits for 1TB (PE125bp) sequencing on HiSeq 2500 today: we're about to jump from 600GB in ten days to 1Tb in six - awesome and awe inspiring! We are also not far away from 1M reads costing less than 1$!

Peter Barthmaier from Illumina walks you through the V4 kits in this video.

We've been waiting for this "upgrade" for since an Illumina workshop presentation at AGBT in 2011. Recently there has speculation that this upgrade would be released to customers in June, but the availability of the kits comes ahead of any confirmation (for this lab at least) that our machine can make use of them. Be careful if you place an order today that you don't order something you can't use; although I'm sure the returns desk at Illumina's HQ in San Diego will be fine as long as you've got your receipt and everything's in the original packaging ;-).

The v4 kits are available alongside v3 so we can now work out how much the additional data is going to cost, and it's just 10% more per paired-end flowcell and actually the same cost for single-end data. The information in my previous version of this post was based on pricing on the Illumina website that was incorrect at release of the new kits. This has now been fixed.
So what does v4 give us: Take a look at the specs on Illumina's website and you can see that V4 gives 33% more reads and 25% more bp than V3. For the application Illumina have uppermost in mind, whole human genomes or similar, this is going to be a big leg up for users. For a lab like mine with lots of counting applications (eg ChIP-seq, RNA-seq) the "$ per million read" costs of V4 are dropping from $4.71 to $3.89. 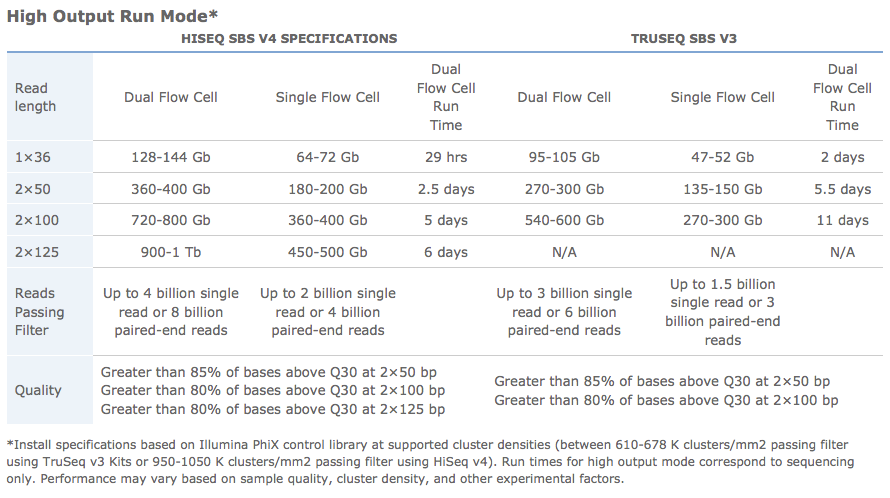 The death of rapid run mode: V4 also kills rapid run mode from my personal point of view. As long as you don't actually need a Human genome in 27 hours (PE100 run time) then waiting for 6 days and a high-output run is going to be much cheaper. You can run 16 lanes on High-Output at PE100 in 5 days versus 16 lanes on Rapid-Run in essentially the same time, but get 4B reads instead of 2.4B. That's also a lot easier for people in the lab with just one clustering/sequencing cycle per week instead of four.

What's missing: Today there is no 150 cycle kit (for exomes) and no single-read flowcells, so ChIP- and RNA-seq users have to wait. I can't believe these will be far behind so am not sure why a more coordinated release could not have happened. The "announcement" of single-read costs suggest we can get 20M DGE RNA-seq reads for only $30 and if we can push down library prep then RNA-seq for under $50 per sample is looking possible. The 2x250bp on Rapid Runs has also been pushed back to the Summer, nearly 300M "500bp" reads at >87% Q30 sounds worth waiting for!

In summary a huge congratulations to everyone at Illumina who helped get 1TB machine out the door, it kicks sand in the face of the 9-stone weaklings of the sequencing world.

My summary in the last post was negative and the pricing confirmation is much more what I expected; more data at about the same price per lane, thanks to Illumina for getting in touch and helping to sort out the confusion. Of course all this means we'll be able to run many more samples in a year and buy a lot more of Illumina's razor blades (more expensive razor blades), and maybe watch that stock price climb over $180?
Posted by James@cancer at 22:41