I'm continuing a series of posts that will highlight small advances we've made in the lab that are unlikely to be published in their own right, this time its the turn of SPRI-bead clean-ups and how we used them to rescue some samples that would not tagment.

The problem: We had a user submit a set of samples for Illumina's rapid exome sequencing in our library prep service. These samples were processed alongside others but the tagmentation for this one user was pretty awful. Most samples dropped out entirely and ony a few generated something that looked as if it had been tagmented at all. The figure below shows tagmentation before SPRI-clean-up and you can clearly see the control (inset) has tagmented and nothing is visible in the second lane where the users samples hold have been. You might also notice that the control is significantly under-tagmented we observed that our control DNA was too high in concentration (15ng/ul instead of 5ng/ul) hence the under tagmentation. Oops!

What was wrong: we tested the sensible things like nucleic acid quantity and quality but there appeared to be enough DNA and its quality was fine. We asked the user to perform a standard PCR in their own lab and that came back positive so we appeared to have something uniquely inhibiting tagmentation.

The solution: We decided that a SPRI-bead clean-up of the DNA before Nextera library prep would be worth testing and this proved to fix the samples. The figure below also shows tagmentation after SPRI-clean-up and you can clearly see that both the control (inset) and the user sample have tagmented. These went on to produce exome sequencing libraries. 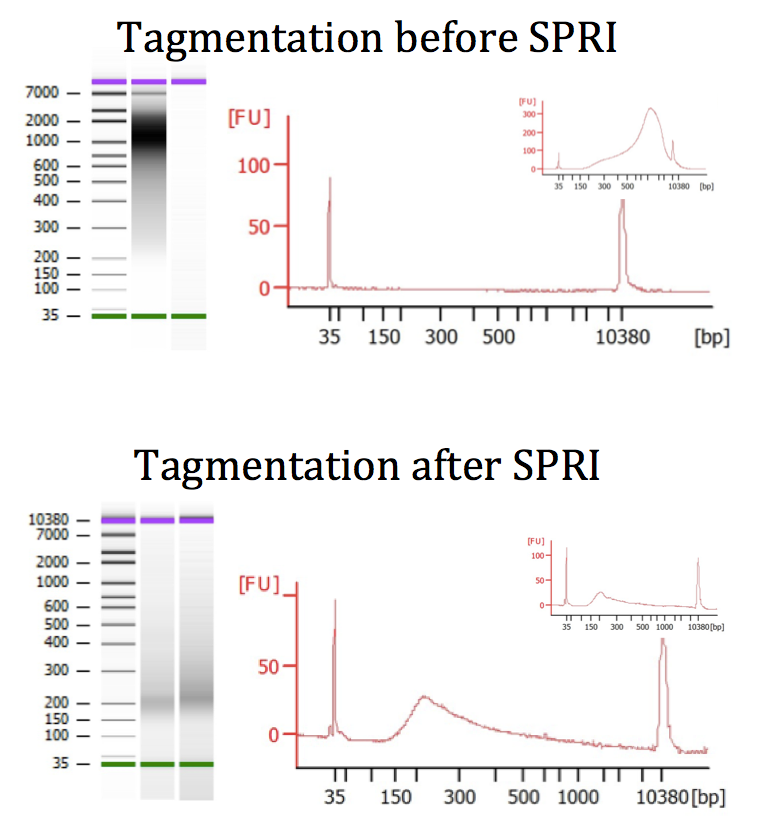 Improving Nextera kits: We'd really like to see a bead normalisation move to the front of all Nextera kits (all kits possibly). A clean-up before starting would rescue some poor quality samples, and the normalisation should make processes more robust. Even if the bead-based normalisation does not work very well (and it does not) it sould give us a much lower variation in concentration between samples in the library prep. Thus a quick QT and all samples can be normalised to the correct starting concentration much more easily.