A wonderful story appeared on BBC news website today about the company Planet Labs who are using a similar idea Illumina implemented in designing NextSeq - borrow from consumer electronics to advance science. Rather than building sequencers Planet Labs have built and launched a flock of 28 shoebox-sized "cubesats" - cheap, miniature imaging satellites. This is GoogleMaps satellite images with super-high resolution.

The team plan to launch 131 cubesats over the next 12 months. The satellites are built from off-the-shelf components and consumer grade camera lenses and solar-charged batteries are housed in a casing covered in solar panels which is not much different in size to a MiSeq cartridge. The entire package measures just 10cm (4in) by 10cm by 30cm. They squeeze into a few kilos what would have been found in a 10 tonne satellite a few years ago. 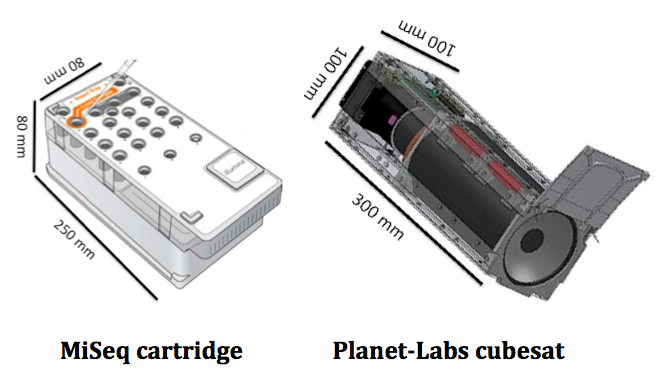 Another parallel with Illumina's NextSeq is that the driving force is a Brit. We do seem able to come up with brilliant ideas, but the Americans seem much better at turning them into a commercial reality.

PS: if anyone from Nasa is reading this and thinking a seqeuncer in space seems a good idea - I'm happy to start work as a consultant!