I did not arrive at London Calling until late on Thursday afternoon but what an excellent start I was given: Clive Brown’s update - where ONT are today, and what’s coming tomorrow! The Thursday afternoon, evening and Friday sessions created a palpable buzz in the attendees. It is easy to get carried away with predictions about how soon ONT will become actual competition for Illumina, but it is not clear that this is ONT's main goal. More exciting is the push into uncharted territory, bringing sequencing to individuals and taking it to Mars. I'm excited; but my core facility manager head says, "hold on, you're not getting rid of those HiSeq's just yet"! 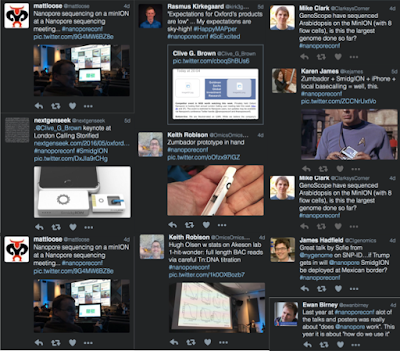 Twitter: London Calling thrives on Twitter, one of my favourite Tweets was from @kirk3gaard asking if we'll get #smidgion in our goodie bag next time? The Tweet mostly likely to impact the people not at the conference was possibly from @ewanbirney who said - Last year a lot of the talks were about "does @nanopore work". This year it is about "how do we use it”. I calculated that just £24million would put @nanopore MinION in every school in the UK…it would be great if this could happen in the next 1-3 years.
Clive's ONT update: Clive started by killing off the R7.3 and stating that R9 is the future (for now, although he did mention R10 at least once). More on R9 later but it is faster (250bps) and more accurate so we can expect more in all regards, and if read-length is the only differentiator people care about right now then Clive's reporting of an aligned internal 2D read of just over 250Kb, should give people something to think about. You should read Keith’s OmicsOmics post as he spent more time at the meeting, and more importantly at the bar than I so learnt a great deal more! Keith had some time to talk to Clive after his presentation and I’d suggest you look at his post to hear about Crumpet chips, pay-as-you-go pricing, flowcell performance degradation, and concatenation of library molecules to keep the pore filled. NextGenSeek Storified the conference Tweets.

The announcements from Clive’s talk alone were enough to keep everyone talking late into the evening: R9, RNN analysis, rapid-1D transposase library prep, Zumbadour, Voltrax, SmidgION, and an update on PromethION. Two of the most exciting bits for me were the announcements about direct-RNA-seq and The Genome Foundry ltd.

Direct RNA-seq: I’ve already covered direct RNA-seq on an earlier blog post (add a link) where I discussed a method to do 16S, and other, rRNA sequencing to determine community diversity. The use of the method as intended was more for poly-adenylated transcripts and this is likely to be the ultimate RNA-seq tool. If ONT can deliver on this I am sure they can outperform Iso-Seq from PacBio as there should be little size selection bias, and if 1 million+ reads are possible at a reasonable cost (say $100) then even Illumina mRNA-seq looks to be on shaky ground. Splicing analysis should become simply isoform counting, and if the error rate get to sub-1% on 1D reads (all RNA-seq would be 1D) then allele-specific expression, and variant detection are both possible.

Clive hinted at the ability to call modified bases in RNA, which is likely to uncover lots of interesting biology. But as there is no 2D read generated there is only one chance to base call from an RNA molecule and with each base modification changing the base calling matrix this is likely to be a big challenge. Initial tests with synthesised RNA are likely to produce a pretty good base caller, but if the number of modifications in real RNA turn out to be high then this could be a big challenge to developing methods, especially if the same RNA molecule is getting different modifications in different biological conditions. Reading 3’-to-5’ means we’ll get the pol-A tail length (if ONT can fix the homopolymer issues). Keith points to the removal of reverse transcription as beneficial in reducing cost, saving time in the lab, removing biases from strand-switching and the horrible error rate of RT enzymes - I wonder if we might discover new classes of RNAs which our current RT-cDNA-sequence strategy is missing?

ONT writing DNA: The Genome Foundry is an ONT company that has developed a proprietary non-phosphoramidite chemistry for DNA synthesis. They can generate long molecules, in a highly parallel manner on Voltrax like devices and this can be considered as “a MinION for synthetic biology” - ONT are reading and writing DNA! There’s a lot of action going on in synthetic biology with one of the most exciting companies: Twist BioSciences, being sued by Agilent. If ONT can deliver in this space too who knows what their next valuation will be?

R7 is dead, long live R9: The new R9 pore, combined with the other changes ratchet speed up to 250bps with 500bps coming and up to 1300bps in the future. Accuracy is going up to 95%+ and 99%+ for 1D and 2D respectively. And ONT are aiming to get to 10-12Gb per run (compare this to the specs on a MiSeq). Part of this improvement is changing from the Hidden Markov Model base calling to a new Recursive Neural Network base caller (I need to verify this). Homopolymers should also see improvements which will help with sequencing in genomes, and ultimately may allow answers to questions like “how does poly-A tail length vary between transcripts?” R10 as mentioned a couple of times so how long we’ll be working with R9 is debatable, and this did come up as an issue in discussions about developing medical applications. The current regulatory environment needs carefully controlled, locked-down tests and devices for use in patient testing. ONT is changing at such a rapid pace that this may be a little while off just yet, but others have faced the same hurdle and overcome it. I can imagine a crappy FDA-approved MinION running R10 with an off-line base caller that if it can deliver a test in a remote clinic, at home, or at the bedside might be perfectly acceptable to non-research users.
Clive presented lots of technical slides on the new chemistry pointing to the new membranes, and new motor protein both helping the new pore achieve performance enhancements.

PromethION and the other bits: PromethION has arrived in at least one lab (Keith’s bar-side investigations may have pinned this down to the Sanger institute). With 3000 channels per flowcell, SBS format loading with multiple samples using a multi-channel pipette and the ability to run flowcells independently could make the PromethION the ultimate core facility sequencer. Some numbers I got at the meeting included PromethION costing £75k, with a $2-3/Gb cost, $600-2.5k/cell, 3k channels (6xminion), and a daily output similar to Illumina's x10 (measured in Tb/day). Voltrax: looking very nice in the demo sessions...can they build one 2M tall as an art installation? If ONT can deliver (where a company as big as lllumina could not) then this has the potential to remove the user as one of the failure modes in library prep, and possibly sequencing once this is integrated with the flowcell. I did not see any movies of Voltrax in operation after teh demo's but I'd like to know if they can make one 2M tall as an art installation? Zumbadour: is a disposable nucleic acid extraction and library prep system squeezed into a syringe-like device. Reagents are immobilised on matrix so that a liquid sample can be sipped, DNA is released for tagmentation library prep (see above) and the resulting library captured onto beads that can be delivered directly to flowcells -  “this thing literally shits beads onto the flowcell”! Clive had one in his pocket - “forget all the assumptions that go with lab work”…”bead loading by gravity”…coming in Q3 2016.Maybe to a space station near you! Non-DNA apps: A really interesting application was described at UK Genome Sciences by Mark Akeson, using nanopores to sequence proteins. Clive described a method to do just this, and also to look at other analytes. Use polymers to which probes or other molecules can be attached as "hooks" to catch other DNA/RNA, Proteins or other bioanalytes for nanopore quantification. Possibly this can be extended to utilise mutation detecting probes for ultra-sensitive and fast ctDNA analysis? SmidgION: I kept this in with the other bits as it seemed almost as unbelievable as the announcement of MinION in 2012. It shows how far ONT, and their users have already gone. I'm sure many people are excited by the prospect of an iPhone compatible stripped down Promethion ASIC with 256 pores; the lower output flowcell, a base calling App, and some low power tricks should deliver 4-5 hour run time on the iPhone battery. All in late 2017.

Predicting how soon ONT will deliver on everything announced at London Calling 2016 is tough. I'll not worry too much if some of this takes a couple of years longer than expected...and I'm sure we'll all enjoy the ride!
Posted by James@cancer at 21:49