I've just readvertised for someone to my lab as the new Genomics Core Deputy Manager. We're expanding the Genomics core and building single-cell genomics capabilities (we currently have both 10X Genomics and Fluidigm C1). I'm looking for a senior scientist who can help lead the team, who has significant experience of NGS methods and applications; and ideally has an understanding of the challenges single-cell genomics presents. You'll be hands-on helping to define the single-cell genomics services we offer, and build these over the next 12-18 months. 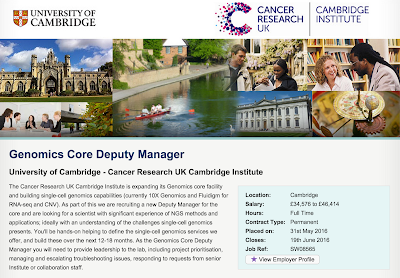 You'll have a real opportunity to make a contribution to the science in our institute and drive single-cell genomics research. The Cancer Research UK Cambridge Institute is a great place to work. It's a department of the University of Cambridge, is one of Europe's top cancer research institutes. We are situated on the Addenbrooke's Biomedical Campus, and are part of both the University of Cambridge School of Clinical Medicine, and the Cambridge Cancer Centre. The Institute focus is high-quality basic and translational cancer research and we have an excellent track record in cancer genomics 1, 2, 3. The majority of data generated by the Genomics Core facility is Next Generation Sequencing, and we support researchers at the Cambridge Institute, as well as nine other University Institutes and Departments within our NGS collaboration.