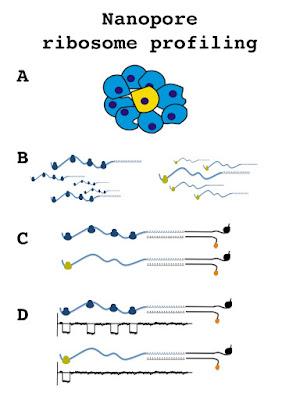 Nanopore ribosome profling: In the figure above the cells from two distinct populations would be sorted (A) and mRNA with ribosomes still attached would be extracted (B). mRNA's are ligated with nanopore sequencing adapters (C). Nanopore sequencing shows distinct pause's at ribosome locations allowing estimation of quantitative translation (D). This is very much an idea that has not gone much further than the back-of-an-envelope and many issues need to be considered in developing methods like this:


tRNA-seq: Mark Akeson's group recently published work on MinION tRNA-seq where they tailed the tRNA with a leader-adapter such that the molecule unzipped from its usually highly configured 2D structure as it was sequenced through the pore (possibly it even reassembles on the other side of the membrane). Other RNA species are likely to benefit from methods similar to this including perhaps ribosomal profiling.

I think data like the tRNA-seq paper, and ideas like mine above and an earlier rRNA-seq idea, demonstrate how much more we may be able to do on a Nanopore sequencer than on our current short-read Illumina sequencers.

The future is very difficult to predict - but it is fun to try!