The future of Illumina according to @chrissyfarr

In yesterdays Fast Company piece Christina Farr (on Twitter) gives a very nice write up of Illumina's history and where they are going with respect to bringing DNA sequencing into the clinic. I really liked the piece and wanted to share my thoughts after reading it with Core-Genomics readers. 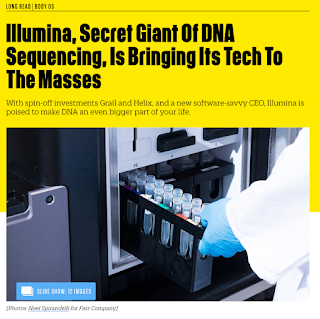 To showcase how Illumina is impacting medicine Christina mentions two recent Illumina spin-outs; Helix (an Apple-esque app store for genome applications) and Grail (aiming to develop early cancer detection tests from deep sequencing of ctDNA). And also highlights some wonderful examples of where Illumina themselves have applied sequencing to clinical cases; the Jaynome (Flately's own genome) and discovery of his having the condition malignant hypothermia; to the more compelling rare disease cases such as Massimio, a boy with a genetic mutation causing HBSL (Hypomyelination in the Brain stem and Spinal cord) a new disease found only by the use of Illumina's technology.

Next-generation sequencing is changing medicine and the reality is when we say NGS most of us mean Illumina sequencing - for now at least.

New business models are emerging in genomics: Illumina's Helix is subsidising exome sequencing costs with the hope that users will pay to query the data over time and that this use will more than cover sequencing costs. In an era of very low borrowing costs buying in now to sequence 100 million genomes might only require users to sign up to a $10 a month plan for the rest of their lives, with queries costing a few dollars - in the case of Flatley's own malignant hypothermia, which can result in sudden death while under general anesthesia, a user might query this before deciding on surgery. for instance Or a family might check for an MT-RNR1 m.1555A>G mutation before their child is being treated with gentamicin saving the 1:500 kids with this particular variant from going deaf while in the ICU.

$10 per month is pretty low compared to life-insurance policies and if Illumina or others can do a deal with the "Man from the Pru" personalised genomes outside of the clinic really could become the norm. $10 per month over 10 years is $1200 versus a $1000 genome, but over 40 or even 80 years should be attractive, and this does not consider the reselling of consumer genomics data as 23andMe are showing is possible.

The negative impact of Illumina's lack of competition: Christina comes back to an issue Illumina are facing more and more several times during her article; the fine line Illumina are walking to bring new products to clinical and even consumer markets without competing with their academic and clinical customers. The Liquid biopsy market is predicted to be worth $1 billion by 2020 (personally I reckon a figure much higher than this), and NIPT possibly $2.4 billion by 2022. The size of these markets is a temptation for the company that is delivering most of the infrastructure being used to service them today.

John Stuelpnagel (Illumina's cofounder) and Jonathan Groberg (biotech analyst at UBS) both express some reservations about where Illumina are going in the comments Christina quotes in her article. John immediately jumps into one of the worries I hear about at conferences and meetings, especially when talking to the commercial sector, he says "people [companies] are apprehensive about Illumina and worried about if, and when, they might choose to compete against them". When asked about this fine line that Illumina should walk to stay on the right side of their customers Jon Groberg says "As Illumina moves into the clinical markets, it's making for some tough conversations", and Chrisina acknowledges that some of the people she spoke to were reluctant to talk openly. This comes out later in the article when Christina is interviewing Christian Henry (Illumina EVP & COO) about the purchase of Verinata and the signal it send to Illumina's users, possibly viewed as competitors. Whilst Henry is clear that competition with customers is "a foundational question for Illumina" (i.e. Illumina does not want to compete directly), Groberg adds that Illumina might be unable to NOT compete. And a description of Illumina as an "800-pound gorilla in genomics" by 23andMe’s director of research Joyce Tung is not completely flattering.

In the article Christina highlights Illumina's early days facing litigation from the likes of Affymetrix, where it was the underdog, to its own litigation against ONT, where it has been described as a bully trying to stifle competition. Illumina's dominance in the NGS market is so large that questions are being asked about whether it is unfairly abusing its monopoly position. As a long-term user, and being previously described as "an Illumina fan-boy" I see Illumina's dominance as down to the simple fact that they bought the best technology (an element of luck), but they put a team together that made it work really really well (they made their own luck by investing and working hard). It is Illumina's investment in R&D that has given us the family of instruments from the Mini-seq to the HiSeq X. I'd love to see stronger competition, but its' not there yet, and some big guns have tried and failed (454 LifeTech and CGI). I hope Illumina don't become another ABI bullying other companies trying to get into the space, as well as users - 10 years ago ABI was not a nice company to work with and users were pretty happy to drop them and move over to Illumina. I'm sure Illumina are working on not making the same mistake. But in her article Christina mentions that some of the people she spoke to were afraid to talk openly about this aspect of their relationships with Illumina.

NGS is here to stay and it is going to become more and more common to hear about it in the news and even down the pub. Jay Flately, Shankar Balasubramanian, David Klenerman et al, Solexa and Illumina will be remembered for developing a technology that changed the world (has anyone written a screenplay). Illumina may not be an Apple yet, but it can't be far away. However predicting the future of NGS has proven to be tough, nearly everyone has under-estimated what/when something might be possible in the future. New technologies like Oxford Nanopore's sequencers are looking like they may be ready for the clinic in as little as two or three years.

I am certain that after almost ten years working with NGS the next ten are likely to be almost as exciting.
Posted by James@cancer at 15:34

Email ThisBlogThis!Share to TwitterShare to FacebookShare to Pinterest
Labels: Next-generation sequencing, Other stuff